A recap of where we are at on account abstraction

In principle, the account abstractions models that we have all considered so far work in a very similar way:

The main challenge is the tradeoff between flexibility of account forwarding policy and safety of transaction processing and transmission. In general, it should not be possible to force other nodes in the network (miners or relaying nodes) to perform large amounts of processing work without at least some risk that the transaction actually will be included in the chain and the sender will be forced to pay a fee.

For example, consider the current nonce model. If an account has nonce 40, and someone sends a transaction of nonce 40, with some gasprice above some minimum, and the account balance is enough to pay for the transaction fee, then there’s a possibility that this transaction will get included in the chain, and the sender of the transaction will have to pay the fee. If someone sends a series of transactions, with nonces (40, 41 … 75), and has enough balance to pay for all of them, then the same reasoning applies (the possibility becomes more tenuous if these transactions together require more than 8 million gas, as that would require multiple blocks, but it’s still there).

On the other extreme, consider an abstraction scheme where it is expected for accounts to voluntarily send a fee at the end of transaction execution, and where nodes fully execute transactions and then at the end determine whether or not they pay fees. This is highly problematic because it requires nodes to fully execute transactions, possibly consuming up to 8 million gas worth of execution time (~200ms) per transaction, and then at the end possibly not having any chance of being paid for it; this could be exploited as a serious DoS vector. Everything in between these two extremes (total abstraction, and forcing one specific signature scheme on everyone) is a tradeoff, and it’s this tradeoff space that we will be exploring.

Suppose that we implement an abstraction scheme that works as follows:

It’s clear to see that the properties are very similar; the only way in which the scheme is less robust from a DoS resistance perspective is that the cost of checking a transaction’s signature validity goes up from an elliptic curve verification (~3000 gas) to 200000 gas. This could be compensated for by requiring a higher expected probability that the transaction actually will get in; essentially, not allowing transaction queues above a fairly short length (eg. 8 million gas).

Another approach is the one described here, as PANIC + PAYGAS: Tradeoffs in Account Abstraction Proposals

Can we try to constrict the abstraction model to remove this fragility, but still maintain the flexibility of allowing users to choose models other than nonces? Yes, we can. But we first need to understand specifically what properties we are looking to preserve.

We can achieve this with similar principles to access lists, with a loophole to allow sending ETH. We need to ensure that:

Here is an entire node policy, in flowchart form (zooming in mandatory to see clearly): 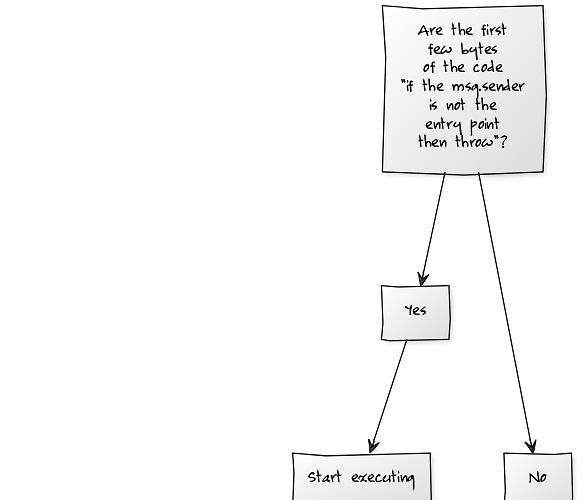 Now, we are back to having a policy that is guaranteed to be strong against DoS attacks: nodes can store and forward one pending transaction per account, after checking that that transaction hits PAYGAS when executed against the current head state, without first hitting any of the above halting conditions.

But what if we want more than one pending transaction per account?

One simple answer is: don’t bother. This is less absurd than it sounds if we combine it with the abstraction technique mentioned above of “have the transaction just specify a piece of code that runs in the account context if the signature and nonce checks pass”, because that would allow multiple operations to be conducted atomically in the context of a single transaction. But it’s still inconvenient.

Another strategy is: if a node sees N transactions coming from the same account, it tries to evaluate them in all N! possible orders, and forwards the transactions if any of those orders lead to all transactions paying gas (if it only finds a subset of M that has an order where all M pay gas, then it forwards that along). This has high flexibility, but the complexity balloons factorially in N, so it’s impractical for N above 4 (possibly even 3).

Example dependency DAG for some txs with UTXOs

Example dependency DAG for outputs from the same ring signature

Upon receiving a new transaction, the algorithm would attempt to process it on top of all vertices in the DAG in order, starting from the root; it would add it as a child of any vertex where it is successful. The node maintains some reasonably low max node depth for the DAG (eg. 8).

Any time the node sees a block where some transactions from a given address are included, it reprocesses the entire pool.

In general, the goal of these algorithms should be to cover a few common cases of multi-transaction broadcasting:

In all of these cases, the burden on nodes clearly increases, but it is still upper-bounded by the maximum size of the per-account transaction pool, which could be bounded by a fairly low value (eg. N = 8).

Thanks for the nice overview, really helpful!

What usecases would benefit from being able to implement nonces (or other uniqueness/ordering mechanisms) at the account level?

Looks like a ton of added complexity to me just to avoid the base protocol handling transaction uniqueness rather than accounts.

There are many classes of applications that don’t need nonces, and where requiring nonces actually harms efficiency by making it harder to deal with cases where multiple users submit something in parallel.

All that complexity and a possible DOS risk could be moved to layer 2 if it was possible to
(1) separate the sender from the gas payer, ie. one account pays for gas (‘Payer’), another one has everything else (balance, origin, sender, …) (‘Sender’). Two signatures and two separate repeat protections (eg. nonces) are needed. The Payer must be a codeless account with a direct signature, the Sender can be a contract with arbitrary signature verification code.
(2) execute code in transactions directly.

The major advantage is that as the contract itself doesn’t have to care about gas payments for this to work, so this upgrade would include all existing contracts.

In (1) ‘everything else’ includes gas limit, gas price and replacement behavior in the mempool.
First the Payer’s signature is checked exactly like now. If correct, Sender’s signature verification starts - the gas cost is paid by the Payer. Invalid signature reverts.
The Payer’s nonce is increased, as in a normal transaction.
For a non-contract Sender its nonce has to be increased too. For contracts it’s a detail that should be determined by the signature verification function; it’s enough to have a bit that specifies whether to increment the nonce or not.
A nonce-incrementing transaction in the mempool is in two accounts at once: Payer’s and Sender’s. Replacement of one of them removes the other - this preserves the current replacement mechanic for both.

By (2) executing code directly in transaction I mean deprecating the ‘to’ field: instead the transaction only has an eth amount and code, all calls have to be explicit. Unused eth returns.
This would make it possible to pay for gas (indirectly) in tokens: include code to transfer them to the Payer (an opcode that provides its address is needed) as a fee.
If Sender is a contract all signature schemes are possible, assuming there’s a way to specify the verification function.

For dapps with a clearly defined site (eg. etherdelta) utilization of this would be trivial - they can generate transactions (as a Payer) on their server. For a general use case third-party providers, or a network of them, would be needed - I can imagine wallets (especially metamask) providing an option to pay a fee in tokens, or something else, directly. All DOS risk is shifted to the willing participants, which can utilize methods not possible on the protocol level (like using a website with a captcha to prevent spamming).

Everything in between these two extremes (total abstraction, and forcing one specific signature scheme on everyone) is a tradeoff

Only the gas-paying accounts would have to use the builtin signature scheme.

The definition is more precise than how I stated it:

An attacker could even send a thousand transactions which are all valid on the current head, but all stop being valid as soon as even one of them gets included

As an option, one can require the user to submit unique PoW proportional to the amount of gas that the user needs.

One can have, say, 3000 gas for free, and then for the rest of it require proof of work (PoW) proportional to the gas needed. This actually solves the problem quoted above, since the PoW will need to be done before submission, so it does not matter if the transaction becomes invalid.

As a brief note, account abstraction provides several benefits to state channels. One notable feature is the ability to easily split fees when going to chain in case of a dispute as a means of lessening griefing attacks.