Some familiarity with rollups and zCash is recommended :-).

The main concepts are:

AccountData contains plaintext values, that we don’t want to be disclosed when the sender creates a Merkle proof of inclusion of a specific money order.

A money order describes the intent of doing a transfer of money. Its view is restricted to the transaction participant.

Additionally, we describe below the structure of a Money Order Receipt (MOR).

A money order receipt is a message sent by the sender to the receiver to let him that he created a money order for him and a proof that he did.

Technically, there should be a single ZKP for registering and using money orders. For clarity we detail two independent ZKP:

Operator Proof (valid for both receiver and sender execution)

The full workflow from user S to send money to a user R is:

For R to transfer the amount of the money order to its own account, with a receipt for a money order M, going to a historical state Sx of the rollup.

The users should connect to the operator with a protocol such as Tor to hide their ip addresses.

The operator knows the Merkle Tree of the historical states. The users need to access this data to create the proof of past inclusion for the receipt. To prevent the operator to correlate such request to account updates the user can first get the data from the operator, then watch the blockchain for any amount of time to update the Merkle Path.

Money orders can be checked until the proof of registration leads to a state known in the state history. In other words is money order is limited in time. With 2^24 states kept and 10 seconds between two rollup update a money order is valid for more than 5 years.

With MiMC as the hash function, a cost of 20K constraints to check a proof, and 2^24 accounts, we can estimate the operator cost for a standard rollup and compare it with this anonymous rollup:

Yes, it should. We’re already kind of doing that already: the operator creates a zk-proof to prove it checked the zk-proofs sent by the users. It means that if a standard rollup can do 4000 tps, this scheme can do 4000*256, 256 being the default value used in the post, not even a limit.

I’ve been following CODA’s work on MNT4/6 optimization but the released improvements weren’t looking like there was much ground being gained.

Do you know if there’s any other public implementation? (Not only would those curves support multi-level recursion but they are large enough to support legacy curve ops, like Bitcoin’s secp256k1.)

Do you know if there’s any other public implementation? (Not only would those curves support multi-level recursion but they are large enough to support legacy curve ops, like Bitcoin’s secp256k1 .)

I have made this one, but it is still a work in progress and it has not been optimized yet. I made a few informal benches and I got the estimate ~30ms for a verifier with no public inputs and ~10sec of proving time for a prover.

EDIT: Prover time is for a circuit of 100k Constraints

We haven’t done a full estimation yet. The marginal cost per update should be size(account id) + size(hash) however.

I think that what they call “transfer commitment” is similar to what we call “money order” (our money orders can’t be repudiated once written: the sender’s balance is decreased immediately and it seems to be the same for Blockmaze’s transfer commitments.

We have more privacy options: in our schemes the sender doesn’t have to leak its account number to the receiver and vice versa.

The main difference is that we’re in a rollup context so we optimize a lot the Merkle tree’s depths to minimize the operator’s time (while keeping the relationship between the participants hidden to the operator), hence this logic of PreviousStates. This also allows a participant to create multiple money orders in a single update making this scheme arbitrary faster (for the right use case…).

I made some graphs to make it easier to understand. Correct me if anything wrong or ambiguous. 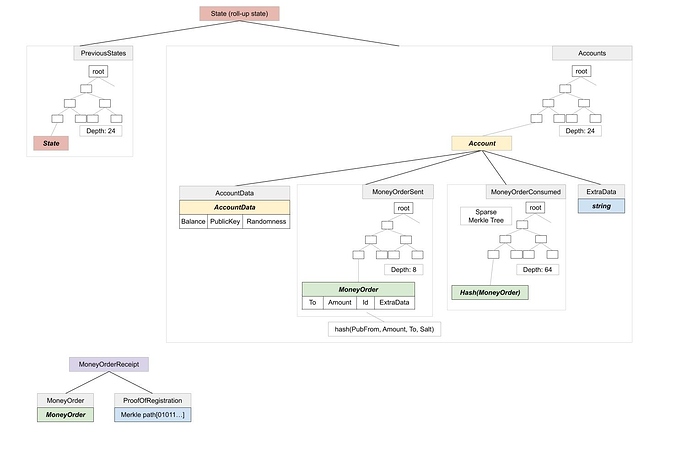 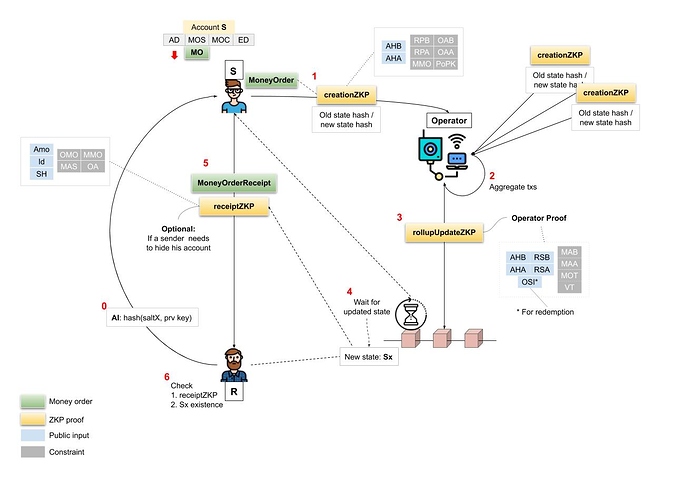 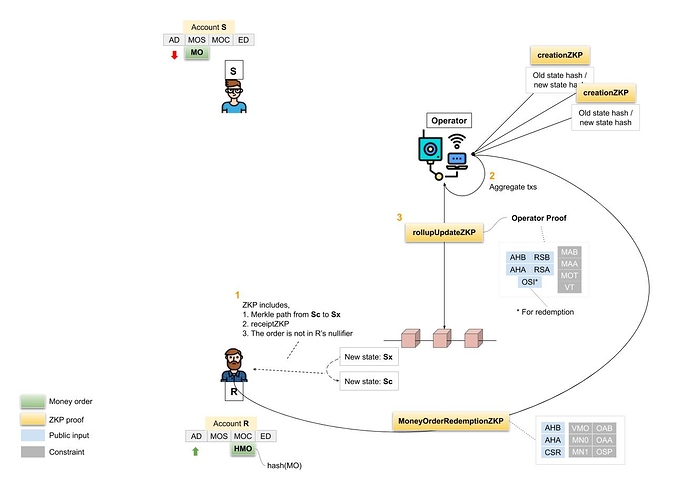 Wow, this is great. Thanks a lot for doing this. I think the graphs are right. For completeness, the previousState Merkle Tree has a depth of 24, and the MoneyOrderSent a depth of 8.

Thank you for the great job! Do you have an implementation of this rollup? We’d like to take a look.

Thanks. It’s under discussion. We’re going to push a detailed specification “soon” (next week hopefully).

For anyone interested, the “next week hopefully” spec mentioned last month