Between the parent of C and C, since the finalization occurs, they are connected by both a supermajority link and a previous-block link. I think I got it.

Maybe we need to consider if votes have hit the Casper contract on each checkpoint.

For the purpose of accountable safety, I can just say, after a checkpoint is finalized by a child C, justification links sourcing C might increment the validator sets.

Here “parent” and “child” are about supermajority links, not about previous block links, I guess.

They are about checkpoint links.

I can just say, after a checkpoint is finalized by a child C, justification links sourcing C might increment the validator sets.

They are about checkpoint links.

Then I was mistaken. Now it sounds like this: when a block is produced with its previous block being a finalizing child, the validator sets of the new block is already incremented. Of course, all this happens in a view containing enough votes for the finalization. For now I focus on a single view, and prove that fork implies enough slashing.

when a block is produced with its previous block being a finalizing child, the validator sets of the new block is already incremented

s/block/checkpoint/g, but looks correct to me.

With these votes, B finalizes A. So C has new validator sets.

Now which one sounds correct?

I’d say a supermajority link A->C can happen, but it must be carried out by the new validator set, not the old one. That is, it’s the dynasty of the target, not of the source, that matters.

If that causes problems, then of course the only approach would be that for any descendants of B, only supermajority votes emanating from B are allowed. 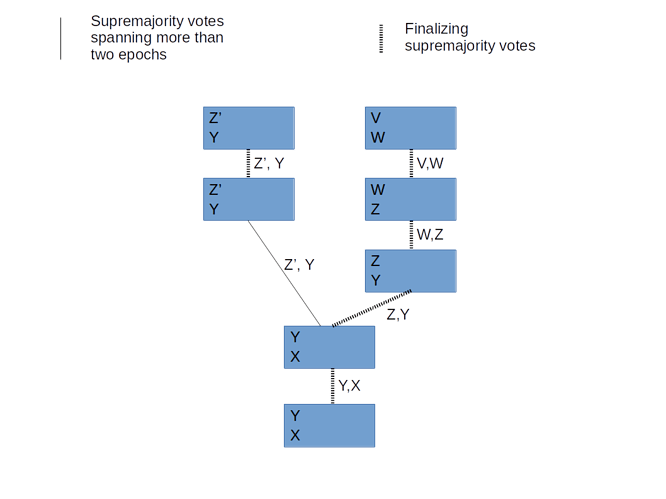 Here, who should be slashed, or what kind of rules are missing? Checkpoints at the same height in the picture are at the same epoch.

It’s not possible for two distinct child validator sets Z and Z’ to appear that way. This is because during dynasty n, dynasty n+1 is already picked, so both children would have to be Z. Then the (Z, Y) line on the left and the (W, Z) on the right would conflict, leading to Z getting slashed.

That seems to work. I’ll associate a chosen next validator set in each checkpoint. 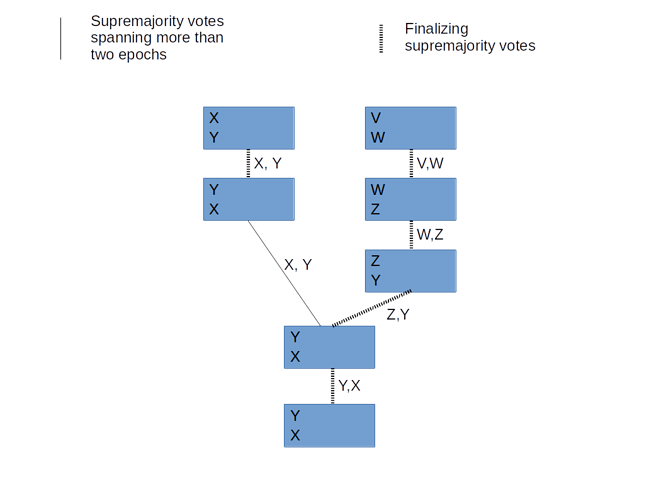 Lets consider a hypothetical situation where there is a network split for one hour and there is a temporary fork into two equal size independent networks. In each of these networks validators will do voting for competing checkpoints. None of these checkpoints will be justified, since there will be not enough voting power for a supermajority vote.

Then after the network is fully connected back again, validators will have no way to revoke the votes. So there will be a large gap of one hour with no supermajority links, and the easiest way to bridge this gap would be to form a very long supermajority link that goes over the gap.

I am a bit confused on how this link would be formed. After the network is back fully connected, the validators need to go way back in time to one of the last justified checkpoints before the network split, and vote for a link that crosses the gap. It is not clear to me how this algorithm would work exactly, because, the validators do not per se know if there was a network split, and that the network is back again. The target of the gap-crossing supermajority link would have to be after the split, and since validators do not know when did the split end, they could only try randomly, which seems like a lot of chaos to me.

During the split, the validators would presumably keep trying, so after the network is reconnected there would be lots of competing minority links that have no chance to become supermajority links and originate from the same justified checkpoint that was justified just before the split.

Note that PoW handles this situation gracefully - after the network is back to normal, the trees are merged, and the strongest wins.

Suppose you have a checkpoint C, which is the last justified checkpoint. Then, there is a split, and there are children D1, D2 of C, then children E1 of D1 and E2 of D2. D1, D2, E1, E2 all get <50% votes on them so none get finalized. Then the spit resolves. Suppose F1 (child of E1) appears first. Then, it will be possible to make a vote with source C and target F1, and all validators will by default try to do this. This allows F1 to become justified, and then possibly finalized in the next epoch.

Since votes are stored in blockchain blocks, and since blocks is formed and suggested by PoW miners, PoW miners will have authority to include particular votes in a block, and potentially delay other votes.

I hope I understood the whitepaper correctly, sorry for a possible confusion

Who should be slashed here for what reason? 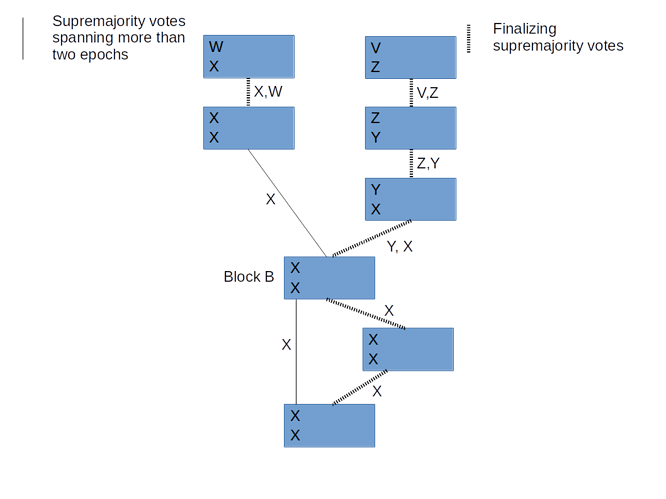 The problem is the ambiguity whether or not “Block B” is a finalizing child. Depending on this, the further history diverges.

So first of all, the diagram as drawn cannot work, because you have two supermajority links both containing X that go to block B, which would get slashed under NO_DBL_VOTE. However, what you can have is, if you remove the arrow from B’s grandparent to B, then the supermajority link between B and B’s parent would get detected by B’s direct left child, but not B’s direct right child. Then, the right child has validator sets XY and the left child is still at XX, and that scenario can happen.

I believe the solution to this is that if you have a supermajority link that spans two dynasties, then it’s the dynasty of the source, not the target, that determines which validators need to form the link. In that case, because the left child and right child still overlap with X, and so the next finalizing link on the left and right branches will both have to contain X, so X would get slashed.

NO_DBL_VOTE does no kill the diagram as shown. NO_DBL_VOTE is activated only when the target (newer) checkpoints are different. As long as the target is the same, votes with different sources are not counted as double voting. The proposed solution does not remedy the situation. The diagram’s links spanning 2 dynasties only involve X whether the source or the target is concerned.

NO_DBL_VOTE does no kill the diagram as shown. NO_DBL_VOTE is activated only when the target (newer) checkpoints are different. As long as the target is the same, votes with different sources are not counted as double voting. The proposed solution does not remedy the situation.

NO_DBL_VOTE is activated if there exist any 2 distinct votes that have the same target epoch.

I changed NO_DBL_VOTE in Cancun after I gave my talk because I found that there was no reason to punish two votes with the same target epoch, same target and different source epochs. That change caused problems with dynamic validator sets.

I remember I saw the changed (more tolerant) version on this page, but that turned out to be an illusion now.