This is a simple proposed scheme for incentivizing the development of software libraries for ethereum (this can be implemented in an eth1 or eth2 context; the scheme is fairly agnostic). Example “ideal beneficiaries” of this include authors of:

Both schemes assume EIP 1559 is included, so there is a “burned fee” associated with every unit of gas consumed; this is important to prevent cheating by miners.

When a contract is published, the author of the contract (ie. the account that published it) is stored. Every time a contract call finishes, X% (eg. 33%) of the burned fee associated with the gas executed inside the callee is transferred to the creator of the callee.

Let T be the previous total amount of ETH fees burned from gas spent executing a given contract with byte length L, and N be the burned fee associated with the gas spent executing a contract call to that contract. When that call finishes, transfer L * (f(\frac{T + N}{L}) - f(\frac{T}{L})) ETH to the author (notice that this is just f(T + N) - f(T) but stretched horizontally and vertically by a factor of L). In general, f should be a function with the following properties:

The idea is that we have a superlinear rebate, which starts off at zero, then grows over time and eventually approaches 50% of the burned fee. The inclusion of L in the calculation is there to “stretch out” the function for larger contracts, making the point at which the rebate approaches 50% proportional to the contract side; this prevents manipulation via combining or splitting contracts. One simple candidate for f is f(x) = \frac{x^2}{4M} for x < M and \frac{M}{4} + \frac{x-M}{2} for x \ge M: 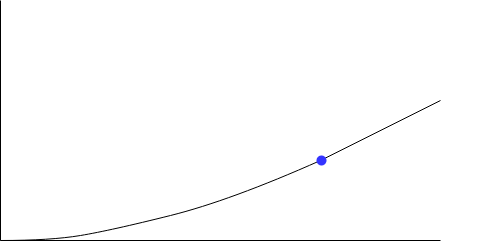 The goal of the superlinear rebate is to add a check against copying a contract and replacing the developer’s rewards with your own. Such a tactic would not be profitable unless you can get many users using your contract.

Note that Scheme 1 is, from a purely economic “tax/subsidy incidence” analysis, a no-op: developers could theoretically undercut each other by providing some portion of their rebates back to users through some extra-protocol mechanism, and the Bertrand competition equilibrium of this is zero returns to the developer. However, the goal is that this would be hard to do, and not worth it in the bulk of cases because the per-transaction fees involved are tiny, and the hope is that if the community agrees that such competition is harmful then there would not be effective infrastructure built to support it.

It would be great to find a way of doing something like this, less repetitive code on-chain would be nice.

Is there a significant financial incentive for contract writers to use libraries? There are a number of technical reasons to use a library (reduced development time, battle-tested code, etc.) but all of these are in place today and yet I rarely see code that refers to on-chain libraries.

How would this stop developers from building the bulk of their contract as a library and then calling it from a thin layer that is the public face of the contract, thus reclaiming a chunk of fees and creating an incentive for them to build inefficient code?

How would this stop developers from building the bulk of their contract as a library and then calling it from a thin layer that is the public face of the contract, thus reclaiming a chunk of fees and creating an incentive for them to build inefficient code?

The ethPM project can definitely serve as a foundation for this. It doesn’t get much visibility for whatever reason

But 5 mill is like 15 fb grade developers, the more you make it the more it will grow.

Another Q: what if your calling someone elses contract, then ur paying that guy? I would never do that if i can just copy the code and get the payment myself, so theres bot going to be a lot of code reuse

It’s would be great to incentive the developers, either from the block reward, or from the gas fee.

I read your previous idea to putting the gas fee into a DAO, and here we would like to propose an algorithm to distribute the fund in the “DAO” to the smart contract developers automatically. The algorithm is inspired by your quadratic voting idea but made some adjustment to address the concern of the resistance on “sybil attack”.

we have briefly code the algorithm here:

Key highlights on the algorithm as below, full paper here :

The key idea of the protocol is to resolve the issue that quadratic voting is insufficient to resist sybil attack, it can be proved mathematically that it is resistant for split DApp attack and is hard for bribery.