The purpose of this post is to present a view of the gossip data that I collected while monitoring the Witti testnet. Similar to flight test analysis in the aerospace world, testnet data can be used to validate assumptions and flag unexpected behavior. This is just my first attempt at trying to make sense of what I am seeing. The more eyes on this the better so comments/feedback/suggestions are welcome.

The data for the following analysis was collected by a single instance of the imp network agent.

The network agent uses Sigma Prime’s implementation of gossipsub that they contributed to rust-libp2p. Minor modifications were made to gossipsub params:

In addition, the gossipsub Least Recently Used (LRU) cache was remove to enable the logging of duplicate messages.

To start, let’s take a peek at some summary level statistics of the data collected.

Next, let’s take a look at the number of times each validator was selected as a block proposer.

Notice how some proposer indexes appearing so rarely in blocks received? This can happen due to a combination of skipped slots and low balances (which will affects the probability of selection).

Let’s zoom in for a closer look. 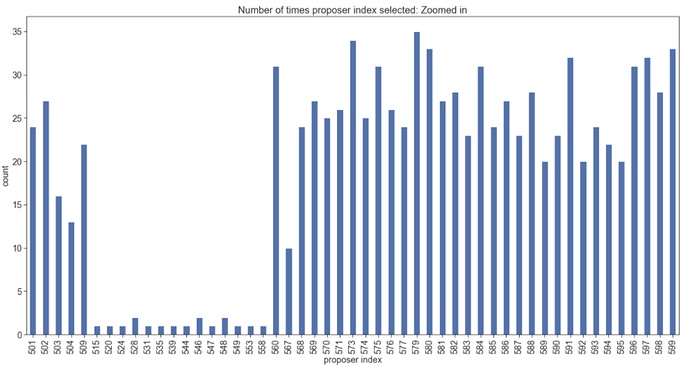 This plot is the same as the previous, but the x-axis is zoomed in to show the actual proposer indexes in question.

Now that we are here…there seem to be a few missing validator indexes. It’s worth counting the missing blocks/possible skipped slots:

Question: Are there that many skipped slots on the Witti testnet, or are clients frequently having to request missing blocks from peers?

Next, let’s take a look at arrival times of the first block in a slot. 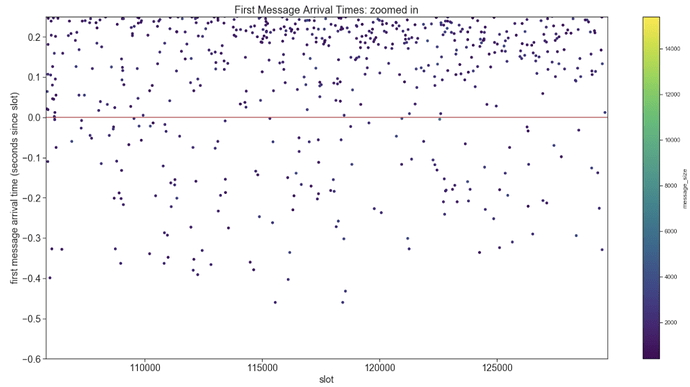 This plot zooms in on the y-axis to look at the earliest arriving blocks. No need to adjust your picture…some blocks seem to be arriving before the slot has started. This isn’t unexpected because node clocks will never be perfectly synchronized.

Question: The networking spec tells clients to filter messages arriving more than 500 milliseconds early. Any thoughts on how we should validate this number?

Now’s probably a good time to mention that the slot is taken from the slot as specified in the block. Arrival times are computed relative to slot times which are calculated as follows:

It might be interesting to get a feel for arrival time variance per block. If you remember, I disabled the LRU cache in the gossipsub implementation to ensure I could easily log duplicate blocks. 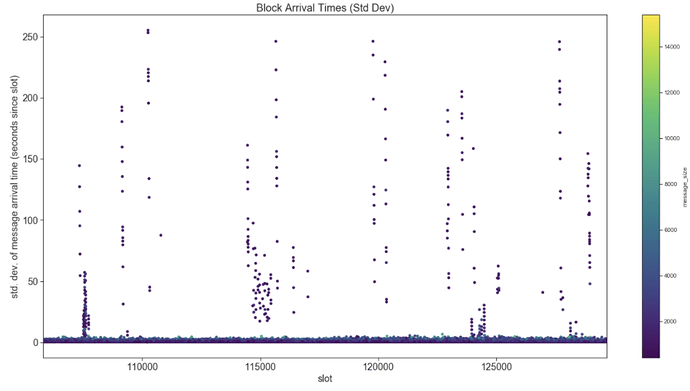 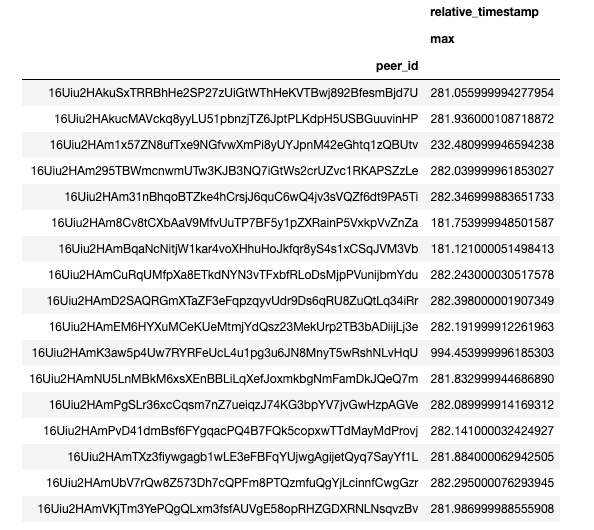 This chart shows us that every peer is (at some point) responsible for propagating a block a couple hundred seconds late. This doesn’t seem to be an implementation specific issue.

Note: It’s not ideal that duplicate blocks are still arriving several minutes after the initial block. Perhaps we should consider more agressive measures to prevent propagation of old blocks.

Let’s zoom in for a closer look at these arrival time variances. 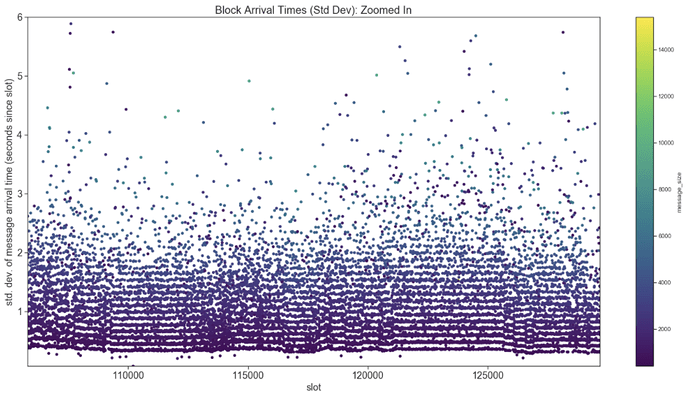 This plot is the same as the previous, but we have zoomed in on the y-axis. Darker colors represent smaller blocks and lighter colors represent larger blocks. The closer the dot is to the x-axis, the smaller the variance in arrival times. Notice the strata in colors? Smaller blocks (darker dots) seem to have less arrival time variance (closer to x-axis) than larger blocks (lighter dots).

Let’s see if the relationship holds if we group by message size. 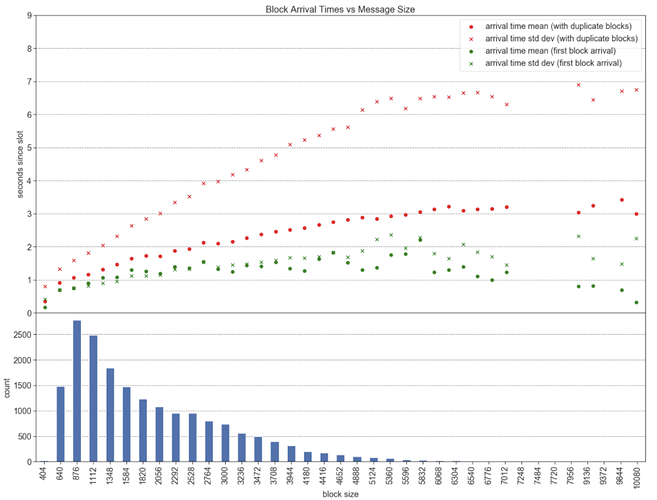 This plot tells a us few things. Let’s start with the upper plot. There are two marker colors on the plot, red and green:

The bottom plot represents the block count by size. I should also mention that arrival times > 12 seconds were filtered out before calculating mean and std dev.

There does seem to be a relationship between message size and arrival variance when accounting for duplicate block messages in the population; however, this relationship is less pronounced when only considering the first block message received.

Question: Why would message size affect arrival time variance? Perhaps block validation affects arrival times. The more hops away the sending peer is from the block proposer, then more times it has been validated before propagating - this could add up. If larger blocks take more time to validate (plus a little longer to send), then this could explain the greater variance observed with larger messages. I would like to collect more data on this before drawing any real conclusions.

Blocks that are several hundred seconds old are still being propagated on the network by peers. This isn’t isolated to a single peer; all of the agent’s peers are guilty of it - even ones that are successfully hosting a large number of validators. This tells me that when the occasional block arrives late, these peers have already requested it via rpc; however, they choose to forward the block bc they haven’t received it (or don’t remember receiving it) via gossip. I don’t see how propagating a block that is half a dozen (or more) slots behind is helping consensus? I suggest:

If clients are relying on the memcache in GossipSub to check for messages they have already seen, then it is possible that the history_length parameter is part of the problem. If this is the case, perhaps we should consider:

The network agent didn’t receive blocks for 22% of the slots. I’m curious if there are that many skipped slots on the Witti testnet

Beaconcha.in has some charts.

This is block production: 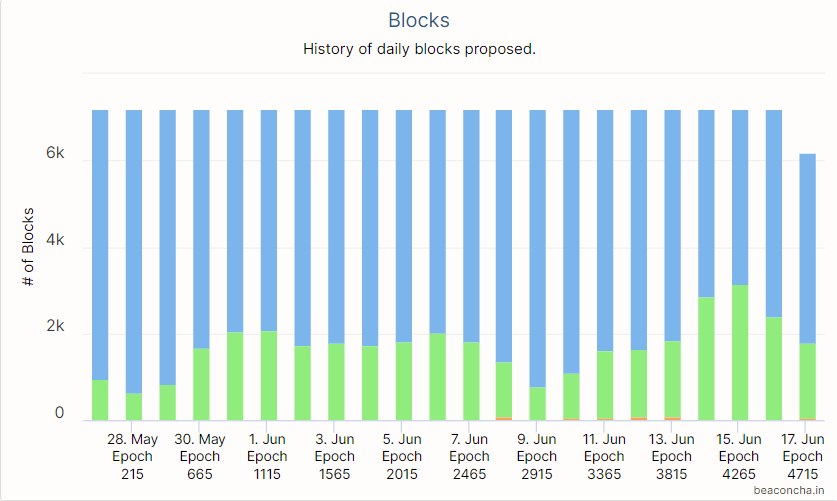 Eyeballing this suggests that 22% skipped slots looks is in the right ballpark. (Blue is proposed; green is skipped; orange is orphaned. The actual numbers are available on the charts page)

Not exactly the same, but a useful proxy, is participation via attestations. It should roughly reflect the number of validators offline: 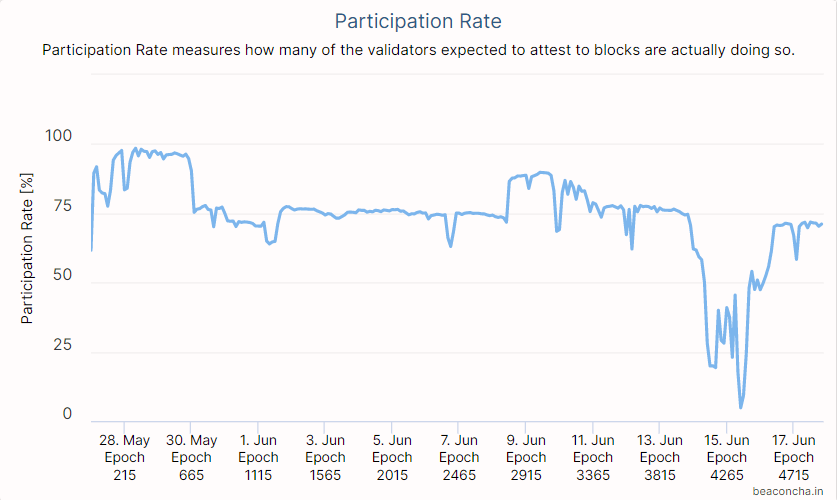 In your June 10-13 period something around 20-25% of validators were not attesting, and probably not producing blocks either. These relatively low participation rates seem typical of the testnets; I’d expect people to try harder to keep validators up for the real thing.

Do you mean 11 IHAVE messages? If yes, then it seems fine since Gossiping is relatively cheap (messages are small)

For default gossip options the average number of messages received by a host is 24 and the total size overhead is ~x6 (simulated network of 10K nodes): packetology numbers

Do you mean 11 IHAVE messages? If yes, then it seems fine since Gossiping is relatively cheap (messages are small)

No, these are full messages. I received ~11 blocks per slot

You were not forwarding received messages, right? In such a case, none of your peers know you already received a message through normal gossip (only can learn via meta-data gossip), so I would expect extra deliveries.

As for the extremely large times in some message deliveries, this sounds like an implementation issue somewhere. Curious to see some more experimentation here

As for the extremely large times in some message deliveries, this sounds like an implementation issue somewhere. Curious to see some more experimentation here

Unfortunately, my agent didn’t have an easy way to log that data at the time, but I have gone back and looked up the peers. Looks like 12 of 19 were lighthouse and the rest I am unable to connect to anymore. I should be able try again on future testnets and will post a follow-up.