I want to share a summary of a work I have done regarding a paper about Fraud Proofs written by Mustafa, Alberto, and Vitalik.

The original idea was to verify the results presented in Table 1 by simulating the network instead of using mathematical closed-formulas (which is what they do in the paper). The simulation also explores other characteristics of the network.

I wrote an article to explain the logic and results of the simulation, future improvements, and some implementation performance notes while profiling the code.

The article tries to be self-explanatory, so reading the paper is not crucial (but recommended).

In particular, here I want to mention a particular part of the article. The comparison that the simulation does between the Standard and Enhanced model.

It is important to clarify what each model means in the implementation of the simulation:

I leave a plot that the simulation generates which show how the Standard and Enhanced model compares regarding the number of light-nodes that finishes pulling their ‘s’ shares from the full-node. Ideally, we want this number to be zero since this would mean that soundness is violated for some light-nodes. 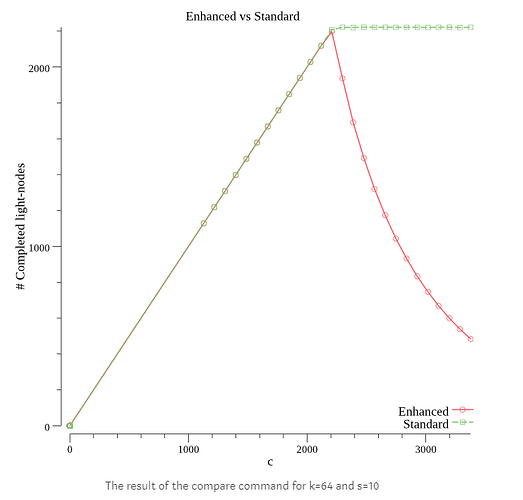 If you enter the article you can see the same graph for (k=64 s=10) and (k=64, s=2).
The three configurations plot shape is similar, but we can appreciate how changing the value of ‘s’ impacts soundness. As we may expect, a bigger ‘s’ makes the total number of ‘finished’ light-nodes lower than a smaller ‘s’.

The code of the simulator is publicly available on GitHub.

Besides this comparison between model, the simulator also provides a way to estimate the number or light-nodes for a triplet (k, s, p) which, discussed with Alberto and Mustafa, is several of orders of magnitude faster than using Theorem 4. To be clear, estimation compared to exact calculation seems to be a good tradeoff here regarding time and precision.

Also, the article mention possible improvements and features that might be interesting to add to the simulator.

As I mentioned before, if you are curious and want to read more, the article has more details of this mini-project.

PD: Sorry for not facilitating more embedded images and links. Since I’m a new user, it seems I can’t post more than one/two links and embed more than one image.

Great work, thanks a lot for this!

To clarify for other readers (this took me a few min to figure out), the X axis of the chart is how many light clients there are, and the Y axis is the max number of light clients that can be fooled (ie. think the block is available) when the attacker is intent on making so much of the block unavailable that the block cannot be reconstructed from the published data.

The standard model says the attacker knows which requests came from which clients, so the attacker can always choose to respond to the queries of a few specific clients and fool them; in the extended model the individual requests are all anonymous (eg. via onion routing) so the only way the attacker can respond to enough requests of any individual validator to fool them is to respond to enough of everyone’s requests, but beyond a certain point that requires leaking enough data to reconstruct the block. Hence, in the extended model, if there’s more than ~2000 clients making requests, the number of clients you can fool (by satisfying all of their requests) without publishing enough data to recover the entire block starts rapidly dropping.

Hi,
Nice simulation !
To explain the problem of data being unavailable, could we also say the following ?

If the attacker is withholding some piece of data in the block, then the honest node is unable to keep record of the state past that point.