Ethereum currencies can only be created with one language, Solidity.

An Ethereum currency capable of being created in any language feasible: a New-ERC Token (exact ERC standard to be determined via EIP metrics).

According to the Ethereum-2 Roadmap, there are many more clients and languages available on Ethereum 2, but for now (due to experimentation purposes), this is the abstraction layer proposed to be worked on via the Architecture & Estimated Roadmap. 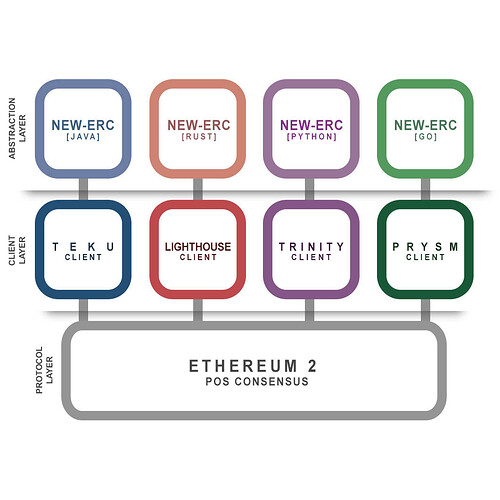 ERC-20 tokens in their current forms act not only as currencies, but are mostly used as investment contracts whereas Fiat currencies are used solely as exchange barters for goods and services.

New-ERC tokens are encapsulated to act as Fiat currencies, but with a twist… The tokens are not to be “bought and sold” via fiat-on-ramp exchanges but rather, only exchanged or “swapped” via decentralized exchanges like Uniswap, etc. Thus, their market caps will rise and fall based on the exchange rates agreed upon.

The goal for New-ERC tokens are for them to be exchanged into and out of both ERC-20 tokens and Fiat currencies without the act of “buying and selling” the tokens.

New-ERC tokens will act as "Personal Currencies" so in order for them to be successfully exchanged, they will need the consent of both parties (like trading one NFT for another OR specifically speaking, trading 1 Yuan for 1 Dollar, or 50 Yuans for 1 Dollar, etc).

Scenario 1: Party A agrees to exchange 1 of their Tokens for 1 Token from Party B.

Scenario 2: Party A agrees to exchange 50 of their Tokens for 1 Token from Party B.

Note: This proposal is still early in its development as more information, rules and architecture is gathered and is ever so evolving thus, questions, thoughts and feedback are very welcome.

As previously incepted from the Light Client Token Creation Proposal.

Minor process note: EIP numbers are assigned when an EIP draft is created, authors do not choose them. If you decide to move forward with this idea and turn it into an EIP, it will not end up with the number 70. For details on the EIP process see EIP-1: EIP Purpose and Guidelines

Ah, got it. More research to do. Thanks for the input @MicahZoltu !

I think this is better handled at the language layer. For example, make a java library that compiles to EVM byte code any java program conforming to certain semantics.

Keep in mind why the ethereum team made their own language to begin with. The semantics of ethereum are not the same as other languages.

Very interesting information here. As @vorot93 had mentioned to me via Discord, I heard there was a similar implementation tried through WASM (which is still on-going). I’ll look very deeply into this.