Front-running on AMMs is a big (and expensive) problem. It causes lost money during large swaps and also raises gas prices unnecessarily due to bidding wars between bots.

I propose a simple method to mitigate AMM front-running by applying zero-knowledge proofs (ZKPs) for updating the swap ratio.

Each swap transaction on an AMM can “hide” the updated pool ratio (and therefore resulting price) by means of a SNARK puzzle, thereby making price-prediction of a transaction in the mempool expensive and uncertain, significantly deterring front-running.

Let’s assume that we have a Uniswap-like pool for the ETH/BTC pair. The mechanism is pretty simple.

And here we can add some tokenomics to run the system more efficiently.

Since increasing puzzle difficulty (n) protects the trader while imposing a potential cost on others, we can also implement a “difficulty fee”, taken from the staked tokens x if n is beyond a certain threshold. 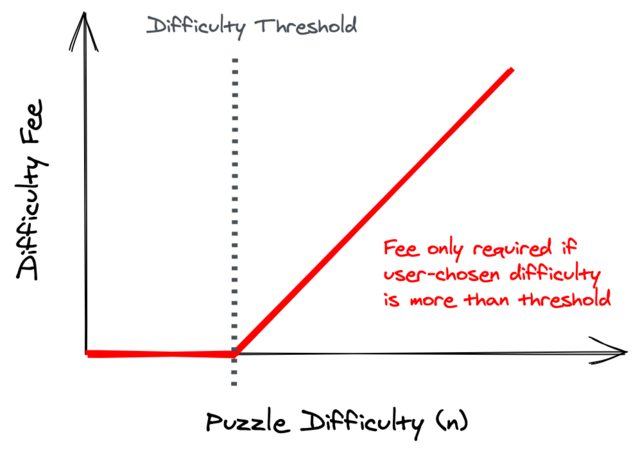 With this idea, I designed an anti-front-running AMM protocol “Snarkswap” based on Uniswap math. You can see the detail protocol design here, and the implementation here.

I need your feedback

Please let me know what you think of this idea, thank you!

Funny seeing two threads at the top trying to tackle the same problem. Here’s the other thread I’m referring to: A simple strategy for Uniswap? - #7 by Mister-Meeseeks

I like this approach because it’s a very elegant and novel, since not many people are looking at using ZKPs for this purpose. However, I think there are a few economic issues that still need to be figured out. And also, I am wondering if you have an estimate for how much gas this would take?

Here is the gas reporter result. I expect swapInTheDark can be reduced roughly to 350K by packing up the input signals. I expect users may use swap (exactly same as Uniswap’s) in general and use swapInTheDark only sometimes.

That’s 780k gas on average, which is a lot. But I guess this would mostly be used for larger amounts anyway.

An interesting idea. But the transaction needs to not just hide the updated pools and ratios, but also the transaction size itself. It may be possible when applied to fully private versions of the cryptocurrencies/tokens.

The primitive you are looking for is actually not a hash, but a verifiable delay function or “VDF”. The hash/proof of work puzzle you suggest can be easily parallelized and thus a frontrunner with large resources can still frontrun. Since you want the puzzle to be solvable, it isn’t really possible to take this out of reach of well resourced attackers.

A VDF however has the property that it can’t be parallelized and takes a minimum amount of time to be solved. If the transaction thus gets included before that time has expired, you can be sure that it can’t be frontrun.

Firs of all thank you so much for your valuable feedback.

An interesting idea. But the transaction needs to not just hide the updated pools and ratios, but also the transaction size itself. It may be possible when applied to fully private versions of the cryptocurrencies/tokens.

Private pool will be perfect for this. However, hiding the trade is a sell or a buy can be enough to confuse the front-runner.

The primitive you are looking for is actually not a hash, but a verifiable delay function or “VDF”. The hash/proof of work puzzle you suggest can be easily parallelized and thus a frontrunner with large resources can still frontrun. Since you want the puzzle to be solvable, it isn’t really possible to take this out of reach of well resourced attackers.

For example if the seed of the VDF is a commitment on chain, the front runner can prepare theft transactions behind the mempool everytime. And if a profitable swap is catched on the mempool then they will just release it or abandon. So this cannot protect the trade from front-running.

By the way, in this snarkswap protocol, undarkening also can be front-run to steal the staking reward after 10 minutes. In this case, I think VDF will be definitely helpful.

If any front-runner appears, I expect people will increase the difficulty and use higher gas price to be included in the block in a few seconds. But to avoid the difficulty imposes too much cost on other users, governance can adjust the fee structure for it.

It’s a clever idea, but completely impractical unless I’m missing something. From skimming the implementation it seems that any individual party can unilaterally shut down trading for 10 minutes, just by “darkening” the pair.

What’s to stop someone from DoS-ing everyone’s liquidity by repeatedly darkening the contract? Why would anybody prefer to add liquidity to a venue where it can be arbitrarily locked up? (Remember front running is not a downside for liquidity providers.) Even without an intentional DoS, a highly active pair like ETH/USDC would pretty much be locked up 24/7.

Predatory bots would wind up abusing this mechanism as a free option. Wait until a volatile period, then buy in the dark. Wait ten minutes. If the price moved in your favor, buy the token at the earlier locked in price. If the price moved against you, just abandon the SNARK.

I think sooner or later someone will come up with a solution to front-running. Or at least a series of improvements that makes it so minor of an issue that hardly anyone cares. But any sort of protocol that relies on shutting down, or even slowing down trading will never catch on in the broader market.

However, hiding the trade is a sell or a buy can be enough to confuse the front-runner.

Probably not for the majority cases. Practically speaking front runners are only interested in front-running buys, since there’s no easy way to short sell and they don’t want to carry inventory. 95%+ of buys are for more a buyer who’s currently holding zero tokens. So if I see that Alice sent a transaction for one million tokens, but I’m not sure if it’s a buy or a sell, I can guess with pretty high accuracy just by checking whether she’s currently holding a million or more tokens right now.

Thanks for pointing out good points.

The 10 minutes is just a prioritized period for the darkener of reveal. If anyone reveals the resulting ratio in a few minutes, then it unlocks the pool immediately.

Private pool will be perfect for this. However, hiding the trade is a sell or a buy can be enough to confuse the front-runner.

What is the actual information that the frontrunner gets when a swap is made? I was under the impression that the amounts could be hidden as well (without use of a completely private pool).

Just curious, but do you have any data about how often large transactions are frontrun? I think it gives us a better idea of the potential size and usage of the proposed AMM.

Right, it goes back to the original staker if it’s revealed within 10 minutes. Otherwise the staked amount goes to the revealer. Please note that it will return the remaining amount after charging the fee. (I need an idea about how to call this fee

.) Anyway the 10 minutes of prioritized period is to protect the staker. It’ll be good for the protocol to make pools undarkened as soon as possible. But if there’s no protection period for the staker, people will front-run the revealing tx to steal the staked amount.

Just curious, but do you have any data about how often large transactions are frontrun?

I am sorry that I don’t have the exact data, but it seems that the front-runners are draining ETH usually in small pools and targeting swaps which amount is over 10 ETH.