Arithmetic hash based alternatives to KZG for proto-danksharding (EIP-4844)

Currently, the proto-danksharding proposal (see EIP-4844, FAQ) uses KZG commitments as its commitment scheme for blobs. This provides important benefits, but it also has two key downsides: (i) reliance on a trusted setup (though a “small” setup that’s easy to scale to thousands of participants), and (ii) use of complex pairing-based cryptography parts of which are not yet implemented in clients. There are two realistic alternatives to KZG commitments: discrete-log-based IPA commitments (see description of how they work in this post on Halo), and Merkle roots based on arithmetic-friendly hash functions. This post focuses on the latter.

KZG was chosen for EIP-4844 because it provides a set of properties that are very important to the goals of EIP-4844 and are difficult to achieve any other way. This includes the following:

Comparison of KZG and other commitment schemes 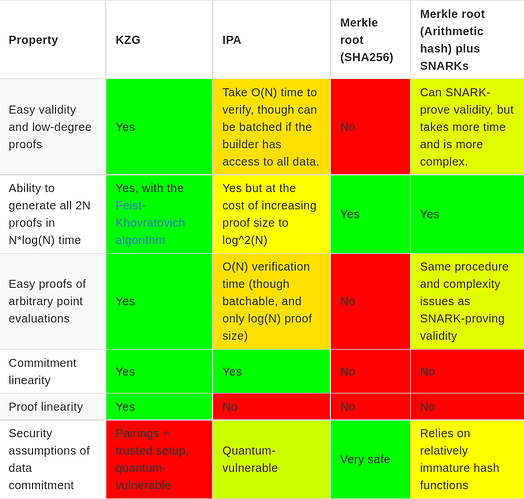 “Arithmetic hashes” here refers to hash functions that are designed to have a “simple” arithmetic representation, allowing us to SNARK-prover them with a prover that is simple, and has a low constraint count. The most established arithmetic hash function is Poseidon.

How practical is Poseidon?

A single round of 2 → 1 Poseidon over a 256-bit field requires ~816 field multiplications, or about 20 microseconds. Merkle-hashing n field elements requires n-1 hashes, so a 128 kB blob (8192 field elements, including the 2x redundancy) can be hashed in 160 ms. An average block would contain 8 blobs and a max-sized block 16 blobs; the hashes would take 1.28s and 2.56s to verify, respectively.

These numbers are not strictly speaking prohibitive, especially taking into account that clients would have received the blobs through the mempool anyway. But they are “on the edge” of being so. Hence, some optimization effort would be required to make this viable.

To prove that a Poseidon Merkle tree is constructed correctly, you need to do two things:

In terms of complexity, this is slightly more complex than the use of SNARKs in existing simple privacy solutions (which typically involve proving one Merkle branch and a few other calculations inside a proof), but it is vastly less complex than other likely future applications of SNARKs, particularly SNARKing the Ethereum consensus layer. It would still take longer to implement than anything KZG-related, however.

The cost of making a proof is dominated by the Merkle root check; the low-degree check is a tiny cost by comparison. If you can fit degree-5 constraints into your proof system, it implies roughly 64 * 8192 = 524288 constraints. In PLONK, this means about ten elliptic curve fast linear combinations of that size. This is doable on a fast machine, but it is considerably less accessible than a KZG commitment, which requires only a single size-4096 EC fast linear combination to commit to the same data. However, it is only a prover burden; the verifier’s work is, as in KZG, constant-time.

The Poseidon hash function was officially introduced in 2019. Since then it has seen considerable attempts at cryptanalysis and optimization. However, it is still very young compared to popular “traditional” hash functions (eg. SHA256 and Keccak), and its general approach of accepting a high level of algebraic structure to minimize constraint count is relatively untested.

There are layer-2 systems live on the Ethereum network and other systems that already rely on these hashes for their security, and so far they have seen no bugs for this reason. Use of Poseidon in production is still somewhat “brave” compared to decades-old tried-and-tested hash functions, but this risk should be weighed against the risks of proposed alternatives (eg. pairings with trusted setups) and the risks associated with centralization that might come as a result of dependence on powerful provers that can prove SHA256.

What about alternatives to Poseidon?

One natural alternative to Poseidon is Reinforced Concrete, which is designed to be fast both for native execution and inside a prover. It works by combining Poseidon-like arithmetic layers with a non-arithmetic layer that quickly increases the arithmetic complexity of the function, making it robust against attacks that depend on algebraic analysis of the function, but which is designed to be fast to prove in bulk by using PLOOKUP techniques.

Reinforced Concrete takes ~3 ms to compute compared to ~20 ms for Poseidon, and has similar ZK-proving time, reducing max proto-danksharding hashing time from ~2.56 s to ~400 ms. However, Reinforced Concrete is newer and even less tested than Poseidon. 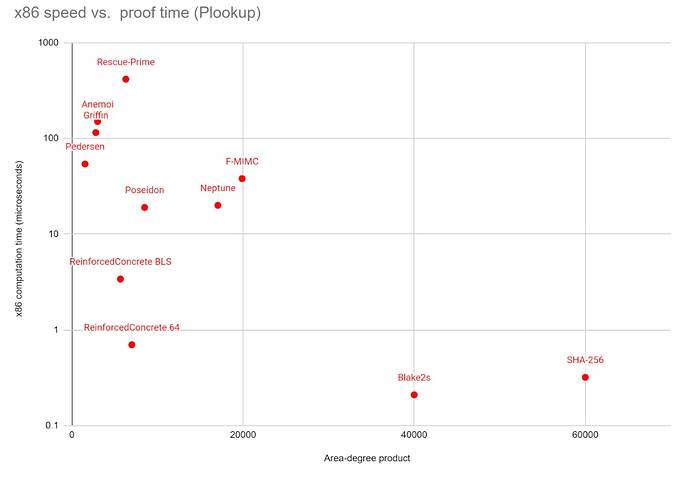 How does the complete danksharding rollout look like with KZG?

Danksharding based on KZG is split into two phases:

Rollups work as follows. If a rollup wants to publish data D, then it publishes a blob transaction where D is the blob contents, and it also makes a ZK-SNARK in which the data D is committed to separately as a private input. The rollup then uses a proof-of-equivalence scheme to prove that the D committed in the proof and the D committed in the blob are the same. This proof of equivalence scheme interacts with the data commitment only by checking a single point evaluation proof at a Fiat-Shamir challenge coordinate, which is done by calling the point evaluation precompile, which verifies that D(x) = y given the commitment com(D), x, y and a proof.

This proof of equivalence scheme has some neat properties:

How does the complete danksharding rollout look like with Poseidon Merkle trees?

To roll out the equivalent of proto-danksharding, we would not need to create a ZK-SNARK to check the correctness of blobs. Simply reusing the current proto-danksharding scheme, where blob data from the sidecar object is checked directly by the nodes to make sure the degree bound is respected and the root matches the root in the block headers, is sufficient. Hence, we could delay the implementation and full rollout of the proof of correctness until full danksharding is released.

But this approach faces a big challenge: the proof of equivalence scheme used in the current danksharding rollout also requires SNARKs. Hence, we would have to either bite the bullet and implement a SNARK, or use a different strategy based on Merkle branches.

For optimistic rollups, Merkle branches are sufficient, because fraud proofs only require revealing a single leaf within the data, and a simple Merkle branch verification would suffice for this. This could be implemented forward-compatibly as a point evaluation precompile that would at first be restricted to verifying proofs at coordinates that are inside the evaluation set.

For ZK rollups, this is not sufficient. There are two alternatives:

Combining these two, a hybrid proposal might be to have a point evaluation precompile that only verifies outputs in two cases:

Optimistic and ZK rollups could either fit into using one of these two approaches, or “roll their own” technology and accept the need to manually upgrade if the commitment scheme ever changes. The precompile would be expanded to being fully generic as soon as some SNARK-based scheme is ready.

Issues with aggregate or recursive proofs

Once full danksharding is introduced, we get an additional issue: we would want to use STARKs to avoid trusted setups, and STARKs are big - too big to have many proofs in one block, so we have to prove every point evaluation claim that we want to prove in one STARK.

This could be done in two ways: a combined proof that directly proves all evaluations, or a recursive STARK. Recursive STARKs are fortunately not too difficult, because STARKs use only one modulus and this avoid needing mismatched field arithmetic. However, either approach introduces one piece of complexity that does not work nicely with the point evaluation precompile in EIP-4844 in its current form: a list of claims and a combined proof would need to be held outside the EVM.

In a STARK paradigm, the proof mechanism would need to work differently: the block would contain an extra “point evaluation claims” structure that consists of a list of (root_i, x_i, y_i) claims and a combined or recursive STARK that verifies the whole list of claims. The point evaluation precompile (perhaps making it be an opcode would be more appropriate as it’s no longer a pure function) would then check for the presence of the claim being made in the list of claims in the block.

Addendum 2022.10.26: technically we don’t need a STARK for point evaluations; because we already have a STARK proving correctness of an erasure coded Merkle root, we could point-evaluate directly use FRI. This is much cheaper to generate proofs, and much simpler code in the verifier, though it unfortunately doesn’t make the proofs significantly smaller, so merged verification would still be required.

How would data availability sampling, distributed reconstruction, etc work with Poseidon roots where we lack commitment and proof linearity?

There are two approaches here:

In case (2), the proof could be a single large SNARK, but there is also a cheap way to build it with existing ingredients:

The main weakness of this approach is that it makes it much harder to implement a distributed builder: it would not require a fairly involved multi-step protocol. This could be compensated for by requiring all data blobs to be pre-registered early in the slot (eg. in the proposer’s inclusion list), giving ample time for a distributed builder algorithm to construct the proofs and avoiding a large advantage to centralized builders.

Why not just do EIP-4488 now and “proper” danksharding later?

EIP-4488 is an EIP that introduces a limited form of multi-dimensional fee market for existing calldata. This allows the calldata of existing Ethereum blocks to be used as data for rollups, avoiding the complexity of adding new cryptography and data structures now. This has several important weaknesses:

Why not SHA256-based Merkle trees now and switch to arithmetic-friendly hashes later?

A possible alternative is to implement SHA256-based Merkle trees in proto-danksharding, and then switch to arithmetic Merkle trees later when SNARKs become available. Unfortunately, this option combines many disadvantages frm both:

It’s the only idea of all ideas explored here that requires a large consensus-layer change, with all the transition complexity involved in properly architecting it both at consensus layer and at the application layer, twice.

If we do KZG now, can we upgrade to something trusted-setup-free later?

Yes! The natural candidate to upgrade to in that case would be STARKs, as they are trusted-setup-free, future-proof (quantum-resistant) and have favorable properties in terms of branch sizes. The point evaluation precompile could be seamlessly upgraded to accept both kinds of proofs, and correctly-implemented rollups that interact with blobs only through the precompile would seamlessly continue working with the new commitment type.

One important issue is that an upgrade to STARKs will likely involve changing the modulus, potentially radically. Some of the best STARK protocols today use hashes over a 64-bit prime, because it speeds up STARK generation and it allows arithmetic hashes to be computed extremely quickly (see: Poseidon in 1.3 μs).

If, for “purity” reasons, it’s desired to convert the point evaluation precompile into an opcode (as it would not be a pure function, since it would depend on other data in the block), this could be done by introducing the opcode, and replacing the precompile in-place with a piece of EVM code that calls that opcode.

To not reintroduce a trusted setup the SNARKs would then need to be based on Halo, I suppose?

Either that or STARKs. Or something simpler than Halo that takes advantage of the “structure” of the problem (particularly the fact that there’s lots of copies of the same problem); perhaps use IPA proofs for each root, but verify the proofs in a merged way.

Plonky2 probably has the fastest Poseidon implementation over the goldilocks field with a lot of clever tricks (see Jakub Nabaglo’s talk). I measured the performance of a 12x64 bit input at 1.3μs.