Some consensus protocols support subjective commit rules, where clients can finalize blocks based on their parameters. Nakamoto consensus, derived from Bitcoin, allows clients to commit a block subjectively with the "n confirmation rule" to take a trade-off between security and latency to finality. CBC Casper adopts subjective finality as its design philosophy, and its finality condition is directly parameterized by the fault tolerance. Flexible BFT is a recent proposal in academia, which modifies the traditional PBFT to support subjective commit rules.

As in CBC Casper and Flexible BFT, subjective commit rules are often analyzed in a mixed fault model, where safety and liveness are proved in different assumptions. This is different from the normal Byzantine fault model, where faulty validators are assumed to attack both safety and liveness. The mixed fault model is the key to make a subjective commit rule because, in the normal BFT analysis, a certain threshold (e.g., 2/3 votes threshold and 1/3 BFT, for asynchronously safe commit) is optimal. Also, the mixed fault model seems reasonable in blockchain use-cases, because incentives around safety failure (e.g., double spend, usually at the cost of punishment) and liveness failure (e.g., censorship) are substantially different.

To clarify, we call this proposal Casper the Subjective Finality Gadget (SFG).
We can achieve SFG by modifying the finality condition of FFG as follows:

The proof of accountable safety is fundamentally the same with the safety proof of FFG, but the fault tolerance is now f_\mathrm{safe} < q_c + q_r - 1. This ensures the quorum intersection, i.e., if a checkpoint C is finalized, the number of faulty validators is not sufficient to unlock everyone by making a conflicting checkpoint later than C justified.
Liveness requires quorum availability, i.e., f_\mathrm{live} < 1 - q_c.

These fault assumptions are equivalent to Flexible BFT, fundamentally because FFG and PBFT share the two-round finality rule. Therefore, we can refer to this graph modified from Figure 6 in the paper about the possible parameterization. 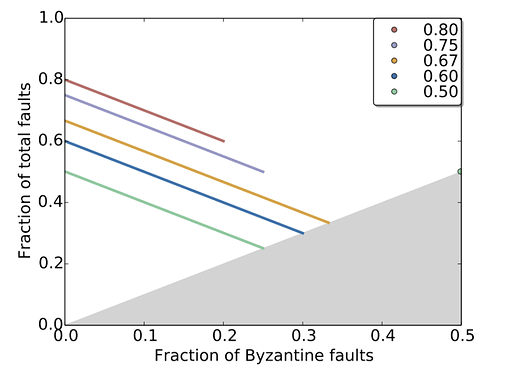 This proposal is one of the results of my unpublished paper.
Eth2 can adopt SFG with little modification on the spec, by considering q_r = 2/3.

Flexible BFT also supports a synchronous commit, as well as the asynchronously safe commit rule we discussed in this post. There are various ways to support synchronous commit in Casper SFG. We will discuss this in a future post.