This write-up proposes a deliberative voting algorithm based on argument trees that could be used in DAOs and aims to produce more well-informed decisions.

Simple ballot protocols, such as single-choice, multiple-choice, weighted, and quadratic voting, are used for decision-making. However, decisions options might have far-reaching consequences that the voter is not aware of or misinformed about. Additionally, decisions might have many aspects, which the voter finds difficult to structure and weight because she/he is overwhelmed by the information. Moreover, voters often have no incentive to consider other aspects or perspectives outside their social bubble.
In this situation and due to lack of time and attention, voters tend to make gut decisions or follow leading figures. Populists can take advantage of the situation by influencing voters with misinformation strategies and emotionalization of the debate.

Instead of voting directly for or against the proposal (or several decision options), deliberative decision-making processes can be used, where people consider, rate, and weight different arguments for and against the proposal (or several decision options) in a debate.
Many connected problems (such as organizational overhead, high cognitive load for the audience, limited number of debate participants) can be reduced by conducting debates on Web2 platforms such as kialo.com (see an exemplary debate here).
Starting from a proposal statement (e.g., ‘We should do A.’) forming the root of the debate,
participants structure the debate as a tree of pro and con arguments and rate their impact.
However, because Web2 platforms rely on centralized infrastructure and are prone to Sybil attacks they cannot be used for actual decision-making for obvious reasons: They

The aim is now to decentralize this debating process to be able to use it to make actual decisions.
In the following, the proposed voting algorithm is described.

Overview of the Decision-Making Process

Initially, the creator of the debate chooses the root statement and deposits a bounty to incentivize participation in the debate. This can either be reputation in the DAO or a monetary reward.

In the editing and voting phase, participants can spend debate tokens \text{T}.
In the beginning of a debate, these are issued to the participants (either equally or based on reputation in the DAO) and can only be used in this specific debate. Most importantly, they are not tradable.

Finally, participants that have performed above average and earned more debate tokens \text{T} than they have spend, earn a proportion of the bounty.
Accordingly, this process can be seen as the decentralization of the job of politicians and consultants.

In the editing phase, the goal is to construct and curate the argument tree to achieve a clear structure and resolve disputes between the participants.

Participants can occupy the following roles in the editing phase:

Jurors, which are excluded from participating in the debate to maintain neutrality, resolve disputes between debaters and curators in digital courts (such as Kleros Court).

Debaters have the option to edit, move, or delete their arguments within a given grace-period. Afterwards, the argument becomes finalized so that other debaters can post dependent arguments below. This gives them room to improve/clarify their arguments and accept suggestions.

A schematic example of a debate tree containing multiple, dependent pro and con arguments is shown below: 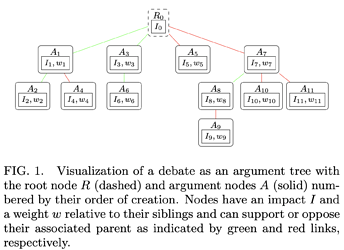 After the editing phase, the whole argument tree is finalized and voters can rate the argument impacts.
Determining the impact of an argument is the key challenge. Here, the goal is to incentivize the participants to rate the impact I of an argument and to decouple this from the individual outcome preference.
In simple terms: Voting solely with the goal to influence the decision should be an unprofitable strategy.

One way is to use a modified version of a prediction market such as Omen that employs an AMM for liquidity provision. This picks up parts of the idea proposed in the post Prediction markets for content curation DAOs.
Accordingly, the impact rating of an argument is determined via an associated market.
To realize this, each creator of an argument has to deposit an amount of debate tokens (\text{T}).
These tokens are then used to mint approval (\text{Y}) and disapproval (\text{N}) shares at a ratio that the creator chooses. The \text{Y} and \text{N} shares form a trading pair and their ratio determines the initial impact of the argument by

which can take values on the interval [0,1]. Accordingly, the less approval shares are available on the market, the higher is the impact I of the argument

Voters can invest their debate tokens to buy \text{Y} and \text{N} shares of under- or overrated arguments on the market, but have to pay fees to the argument author.
This mechanism incentivizes them to look for opportunities and to consider different arguments perspectives.

After the market closes, voters can redeem their shares for debate tokens. The author and liquidity provider gets the remaining debate tokens + fees.
If the author misjudged the impact of her/his argument initially, she/he suffers permanent loss.
If he misjudged the impact a lot, the loss can be larger than the fee revenues.
To prevent authors from knowingly posting bad arguments and rating them as such, the initial mint ratio can be limited to initial impacts I\in[0.5,1) so that large permanent losses are likely in this case.

An example is provided below: 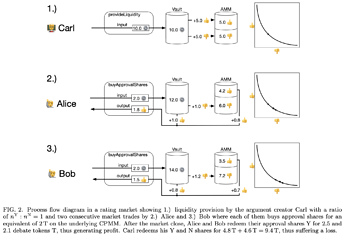 3. Tallying Phase: Accumulating the Weighted Argument Impacts from the Leaves to the Root

After the voting phase ended and all markets are closed, the impacts of the arguments has to be weighted and accumulated from the leaves to the top of the tree. The weight of a node N_i can be defined by

This allows for expressing the impact of a node N_i by

as two terms scaled with a mixing parameter \gamma_i. The first term contains the nodes own impact I_i' being determined directly from the associated rating market. The second term contains the weight-averaged impact of all children nodes

resulting in the subtraction of impact, if the associated node opposes its parent.
The outer \max operator ensures that the overall impact value cannot become negative.

Both terms are scaled with the mixing parameter \gamma. The higher the value of \gamma, the more influence the children nodes have on I_i. Because the influence of a single node on the decision outcome decreases with increasing distance from the tree root, it becomes less attractive to add too many layers to the tree, which incentivizes keeping debates short.

Special cases arise for the different node types in the tree:

If the weight-averaged impact of the root node’s childrens is >0.5, the proposal is accepted. Otherwise it is rejected.

Critical discussion is heavily encouraged, as there are likely many more flaws to be found.

By constructing a tree of pro and con arguments, voters are quickly onboarded and get a clear overview of the different aspects of a decision. Together with the rating and weighting of the arguments the reasoning behind a decisions becomes very transparent, which legitimizes the process by design.

For more details and updates, refer to the ArborVote whitepaper draft.