Aragon Labs is doing some experiments to allow secure off-chain voting that can be verified on-chain without subjective Oracles or any other trusted component.

The mandatory requirements for this proposal are:

The constraints of this proposal are:

Under the design of this proposal, when creating a new voting process, organizers submit a transaction to Ethereum specifying the contract address of an ERC20 token to use as a voter census. The Storage Root Hash of this address, at a specified block height, becomes the census root for this process. Anyone who holds the given token can prove their eligibility by providing a storage Merkle proof (via EIP1186) of their balance for the token. They can then cast a vote by sending the proof (siblings) and a signature to a zk-SNARK rollup relayer, which will compute a proof of the final results.

The actor computing the zk-SNARK proof (coordinator) for the results could potentially decide to exclude some votes, thus censorship is possible. We solve this problem by enabling anyone, not just the coordinator, to send new votes. A user can generate and submit a rollup containing just their vote if they detect that a coordinator has not included this vote.

Our proposal uses snarks mainly for the following purposes:

On this schema, we can identify 2 main problems to solve:

ERC20 storage proofs are very complex to verify within a snark. This is partly due to storage proofs’ use of RLP parsing and multiple keccak256 hash verifications, both of which are inefficient to compute in state-of-the-art snark rollup technology. This problem is difficult to hack around; for the moment we solve this dilemma with optimistic validation.

We need to define a mechanism to verify user signatures. One of the current standards is EdDSA using a BabyJubJub key, which can be derived from an Ethereum signature by using the signature as a raw private key, allowing the user to recover the address. As this method relies on a user signature, it is unfortunately vulnerable to the potential threat of a malicious agent gaming the user- those expecting to sign with a web wallet could be tricked into signing fraudulent transactions. This vulnerability exists wherever a web wallet is used to sign, and we think a potential solution could be a web3 method to derive a private key using the web address as a derivation path.

There is an additional challenge here of proving that each token owner’s Ethereum address approves this BabyJubJub key for voting at the block height of a voting process’ creation. We achieve this with a singleton smart contract that maps Ethereum addresses to BabyJubJub public keys, where a user must add their key to the smart contract via a standard transaction. The mapping of an address to a key can be challenged via an optimistic storage fraud proof (since we have already opened the door to the optimistic validation of storage proofs). This solution also solves the data availability problem with a reusable design, as it is expected that these authorized keys will be used multiple times in different voting processes.

In summary, we can handle most verifications, but not all, inside a SNARK.

A proposal for a PoC

The circuit and the contract

A zk-SNARK will aggregate a list of cast votes. The zk-SNARK proof is either valid or not based on a given list of votes, a census root, an election identifier (electionId) and an aggregated result. 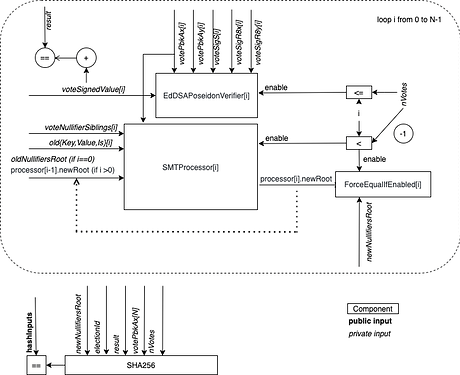 The inputs of the smart contract function call for uploading the coordinator results are:

We implemented in https://github.com/vocdoni/voterollup the minimum viable smart contracts and circuits to check the costs and viability of the solution. This PoC only includes the user registry, vote aggregation, and fraud proofs verification.

We did some measurements to estimate a feasible number of votes to aggregate, using a standard server with 32GB RAM / 8 CPUS. We found that is possible to aggregate up to 300 votes (with a 64-level Merkle tree accumulator and about 3,8M constrains), taking 450 seconds to create the proof and consuming 30 GB of ram. For the proofs, we used Groth16 with Circom, witness generation in C++, and rapidsnark.

On the positive side, the proof that needs to be computed to generate a fraud proof is small enough (50k) that it can easily be generated in a browser. This allows users to challenge a voting batch without downloading any extra specialized software.

They are some areas that we want to explore further:

Here a diagram that might help add some more clarity to the previous explanation: 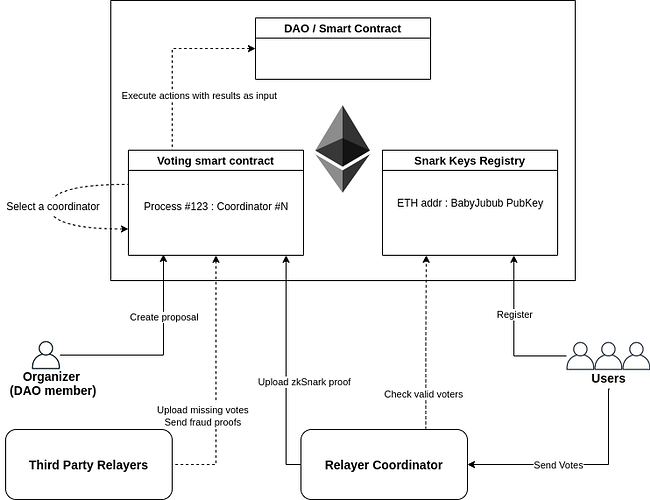 Hi guys, we love your design. We were working with Snapshot slightly prior to your post and are happy to say that we do have solved 1 and 2, using the Keccak implementation that Lior Golberd created. https://twitter.com/LiorGoldberg2/status/1433395378997575684

We will soon share the Cairo contracts associated with that work