“Finality gadget” is a component that overlays any Nakamoto-inspired block proposal mechanism and provides deterministic finality with safety robust against network failure (asynchronous safety, Footnote 1). This idea is initially proposed by Casper FFG and now adopted by Polkadot (GRANDPA), NEAR (Nightshade Finality Gadget), and Concordium (Afgjort).

In this post, we call the blockchain target chain, which our finality gadget overlays. The protocol of the target chain can be PoW + longest-chain, PoS + LMD GHOST, Ouroboros, etc. Such a protocol is required to produce blockchains, and the chains must eventually converge to a single chain by its fork-choice rule.

For a given target chain (e.g., eth2’s beacon chain, Eth1 chain, etc.), we introduce another blockchain protocol as a finality gadget (FG) chain. (We call the blocks of the FG chain FG blocks.) The FG chain only exists for finality. Specifically, we construct the FG chain as follows:

The FG chain and the target chain comprise a two-layer hierarchy of chains. 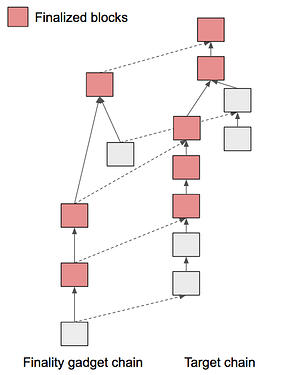 The finality condition and its relation to the fork-choice rule are:

The advantage of our proposal is the flexibility of the choice of the FG chain; we can use any blockchain/state machine replication protocol for the FG chain depending on the needs. For example, Hotstuff for optimistic responsiveness & linear view-change, Flexible BFT for diverse commit rules, CBC Casper for the win, etc.

We can adopt a blockchain protocol for the FG chain in a composable way because the modification is only about the application-level validity condition of blocks. Notably, the “checkpoint must be received \Delta ago” rule guarantees that the timing of accepting a FG block is not affected assuming \Delta synchrony bound.

In the construction of a hierarchical finality gadget, a few on-chain mechanisms of the original protocol adopted for the FG chain must be “embedded” in the target chain.

One approach to slash equivocating validators on the target chain efficiently is to support FFG-style stateless slashing condition so that it becomes sufficient to submit a pair of equivocating votes on-chain to prove equivocations. We conjecture that Chained-Tendermint/Hotstuff can support this by requiring votes to have a few additional fields like FFG. Also, an instantiation of CBC Casper has a stateless slashing condition.

We can consider the “checkpoints tree” in FFG (See Figure 1 in the original paper) is a virtually constructed FG chain. The safety mechanism of the virtual FG chain is fundamentally chained-Tendermint (Footnote 4). Note that unlike FFG, the checkpoints in our approach are not pre-defined.

The hierarchical finality gadget is similar to the hierarchical structure of Eth2 and CBC Casper sharding, where shard blocks are referenced by the parent chain and finalized if the referrer is finalized. (The actual finality condition is more complicated because of sharding specific reasons e.g., fraud proofs.)

Casper FFG is a bit hard to guarantee liveness (at least in the traditional network model, due to the bouncing attack). Our framework potentially enables us to design a finality gadget in a way the safety/liveness proof becomes more intuitive.

Moreover, if we adopt a responsive FG chain (Footnote 5), the latency to finality only depends on the network speed, rather than an in-protocol time parameter like epochs. This is similar to GRANDPA.

Eth2 “merges” the finality gadget and the target chain; votes (called attestations) are used for both Casper FFG’s finality and the fork-choice rule (LMD GHOST), reducing the overhead. To merge two layers in our proposal, we choose a lock-step FG chain which proceeds in epochs and replaces the data fields of attestations used for FFG with the ones for the FG chain (Footnote 6), sacrificing the responsiveness.