See also: ideas near the end of this thread that led to this concrete proposal.

Consider a version of EIP 1559 that works as follows. The protocol maintains a parameter, excess_gas_issued. The protocol has a pricing function:

Where exp(x) \approx 2.71828^x. In an actual implementation, this would of course be replaced with an integer-math-friendly approximation, but it’s mathematically cleaner to think of the above formula. 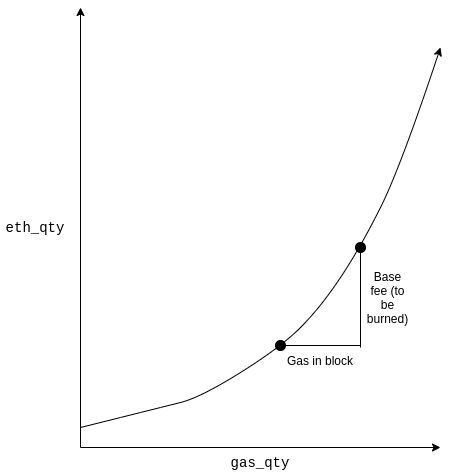 This creates a mechanism very similar to EIP 1559. The “basefee” equivalent here is the derivative of the curve at the current excess_gas_issued value, so basefee = eth_qty(excess_gas_issued) / (TARGET * ADJUSTMENT_QUOTIENT) (remember basic calculus for how \frac{d}{dx} e^{kx} is computed).

But this mechanism is superior in two key respects:

Note that because of the nonlinearity of the burn, EIP 1559 would need to be adjusted. There are a few options:

10 Likes
Should storage be priced separately from execution?
Who pays for congestion? Optimal design of protocol fees
barnabe May 13, 2021, 10:39am #2

With initial simulations based on the abm1559 library it does seem to be the case that oscillations are not as pronounced with the AMM design vs the classic 1559 update rule (see this notebook for early results).

A spillover of higher gas price into subsequent blocks may be something that we actually want. There are two reasons I can think of. First, it could be because there is an additional cost from having multiple large blocks occur in a short time interval, holding constant the long run average block size. I do not have a good idea about how large this cost is.

Another reason we might want a spillover is that we want to very strictly adhere to the target block size, rather than consider a cost of overshooting the target and optimizing between this cost and providing additional block space. I personally think optimization could be better if we set the right parameters. But even if we were to choose to adhere to the target, keeping the hard cap of 12.5M gas may be better than allowing a flexible block size and misaligning incentives.

Suppose we find that we indeed want a spillover. Even in that case, I think the mechanism should be such that the proposer of the original block faces the highest price, and the price gradually decreases if subsequent blocks hit the target size. This makes sense especially if the rationale for spillover is that we care about large adjacent blocks. If you are farther away from the congestion, your transactions add less to the congestion, so you should pay a lower tax.