What we already have:

What do we want:

Make withdrawals usable both for individual users and different kinds of pools, both custodial and non-custodial. In best case pool assets should be tokenized to fulfill investor’s needs, so it would be easy to invest fractional values less than 32 ETH and exit to money whenever requested by each co-investor. We expect validator stake could be used for issuing derivative assets secured by stake in DeFi or similar, attract more funds in staking and increase development of derivative financial instruments in Ethereum. Pools and tokens should be secured by a well proven mechanism of Ethereum contracts to meet the needs of both investors and pool owners without much trust to each other.

How could we do it:

With the target of keeping core Beacon Chain logic as simple as possible, PUSH with the same capabilities will be more complex, therefore PULL proposed for 0x01-prefix should be preferred.

This idea is explained by @djrtwo in Simple eth1 withdrawals (beacon-chain centric). We have following flow on withdrawals from user’s side: 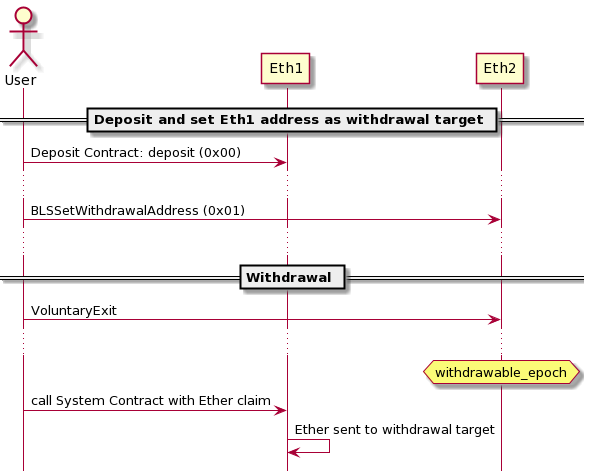 What is important, it also works for trustless pools: 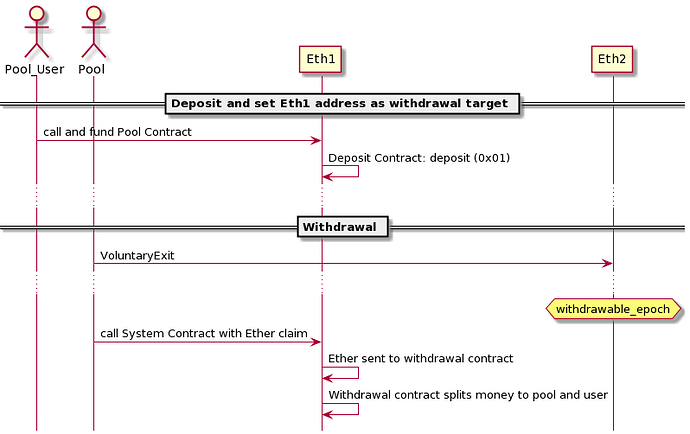 New event is proposed for Eth2, BLSSetWithdrawalAddress which could change withdrawal_credentials. Some details about its handling:

What this means for usage:

Some opposes and defends on this decisions:
N: What if BLS withdrawal key is compromised, I should be able to change it
A: You could set an exact withdrawal target in this case, since you are protected from anything signed by a compromised key.

N: What if I set withdrawal to contract address in eth1 and its compromised
A: You could submit a withdrawal contract address change signed by BLS key at any time, so the safest way is to do it, when you are confident in the withdrawal target. If it’s allowed to change withdrawal credentials from one eth1 address to another, the dilemma appears, who should sign such a change. Both pools and their users could could trick each other if it’s allowed.
NN: We could add is_final flag, so when it’s false, you could submit another change
AA: If it’s not final you could submit a change signed by withdrawal key and change it, so not a final field secures nothing. So it’s the same as having withdrawal_credentials started with BLSWithdrawalPrefix but without extra complexity.

There are several concerns about partial withdrawals, let’s dive into it. The main challenge of developing withdrawals is non-symmetry of eth2 with eth1. While it looks like both networks have some kind of accounts and balances associated with it, there are a lot of nuances

What’s on the other side. Do we really need it?

Eth1 -> Eth2 gate would be helpful (so, you could send BLSSetWithdrawalAddress and anything else by call in Eth1) for pools and other contracts, though we are not sure there is a sense of making a system contract for this. Instead, any third party could create one and provide a service for a fee. Being off chain it doesn’t require too much complexity and will offer services that system contracts are unable to provide, for example, callback. In the worst case you will lose a fee, which is small and good service will compensate for the outage by something which couldn’t be written in Solidity.

While such service could improve simplicity of building Eth2 pools and staking tokenization contracts, it’s not a requirement.

One of the latest views on merging Ethereum 1 into Ethereum 2, A rollup-centric ethereum roadmap by @vbuterin assumes one Ethereum 1 execution shard. As Withdrawal touches both Ethereum 2 state and Ethereum 1 shard we expect asynchronous execution of withdrawal (we need to connect eth1 and eth2 events, handle errors, etc) in this case with a lot of extra complexity added due to this. If we are going to couple Ethereum 1 shard with Ethereum 2 state strongly, as currently proposed(see Vitalik’s comment in AMA and Executable beacon chain), so Ethereum1 is wrapped by Ethereum2, it greatly reduces implementation complexity. While it could make eth1-eth2 communication way simpler and increases profitability of validators, it has several nuances:

As @djrtwo stated, we need to only commit new prefix(es) today, and could start polishing the withdrawal specification. On the other side, this will be enough to start implementation contracts and pools. Though as start is already and withdrawal takes less than a day, we will definitely have a huge backlog of ready for withdrawal validators at launch of withdrawal feature, which should be handled. BLSSetWithdrawalAddress could be added before everything else, as nothing prevents to submit withdrawal_credentials to Deposit Contract today with a prefix different to 0x00.

To prove viability of 0x01 withdrawal prefix we are going to make PoC of staking pool with fractional shares of validator’s stake to clarify challenges in eth1-eth2 deposit-withdrawal flow from staking pool view and start designing of system contract.

I’m not entirely sure what this proposal brings over Danny’s. The additional requirements in the “what do we want” section all seem to be related to the functionality of the user-deployed ETH1 smart contract rather than the withdrawal mechanism itself. Perhaps a summary of the key differences as you see them would be helpful here.

I’m trying to add only minor features like only single change of withdrawal credentials. Overall I advocate Danny’s proposal. I don’t oppose it.