Last week we made a v0.2 release of Miden VM (the VM around which we are building Polygon Miden zk-rollup). The v0.1 release was largely based on Distaff VM architecture, but v0.2 is a complete overhaul which comes with lots of new features and makes the VM Turing-complete.

A lot of things have changed under the hood in this release. To mention a few:

The layout of the VM’s execution trace looks as follows: 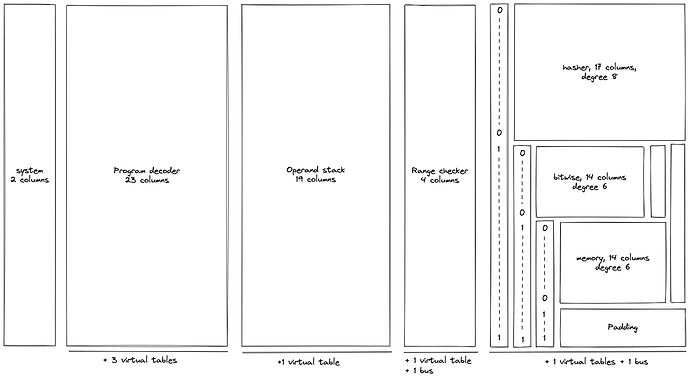 In the above, virtual tables and buses are variations on multiset checks mentioned previously. The detailed explanation of the design (including all AIR constraints) can be found here.

Overall, execution trace of the VM requires 84 columns for ~100-bit security level and 93 columns for ~128-bit security level (each column contains 64-bit values). We anticipate adding 5 - 10 more columns as we add more features to the VM (planned for v0.3 release) - so, the final column count will be closer to 100. Maximum degree of AIR constraints we use in the VM is 9.

The new architecture allowed us to make the VM much more expressive. Specifically:

We’ve also made quite a few improvements to the Miden assembly language, which now support procedures with local variables and comes with a standard library (which is, for now, fairly nascent).

A really nice benefit of using a small field and adopting a chiplet-based design is that, even after adding all of the above features, performance of the VM actually improved. Here are a few benchmarks for executing the VM for 2^{20} cycles (using BLAKE3 as the hash function and targeting 96-bit security level):

Proof size for this computation is about 100 KB, and verification time is really fast - usually under 2 ms.

Thus, for example, on an M1 Pro Mac, the VM can execute (and prove) over 5 SHA256 hashes per second. This is without any specialized circuits or instructions.

Also, there is still quite a bit of room left for optimizing both the prover and the implementation of the primitives - so, we hope that the above numbers will improve in the future.

Miden VM is still a work-in-progress. As mentioned above, we have a few important features planned for the next release. These include:

But we’d also like to know what others think - so, we welcome any feedback about the design or the implementation (the VM is fully open-source - so, feel free to take a look at the code).

Seems very cool, have to take a closer look. Does this change verification time at all? And curious more broadly on any work you guys have done around specialized hardware for provers (ASICs, FPGAs, etc) and what magnitude of efficiency gains might look like vs. general purpose hardware

Thank you! The verifier time is super fast - usually under 2 ms on a single core. This didn’t really change much since the prior version (or at least not enough to notice when measuring in milliseconds).

Regarding hardware acceleration: I don’t have any concrete results on this, but I’d expect GPU/FPGA acceleration to result in 5x - 10x speed-up, and much more for ASICs.

For STARKs, the bottleneck is frequently data bandwidth (not computation). So, for example, once we have GPUs/FPGAs running on PCIe 5, proving speed will basically double as compared to PCIe 4.

Know everything is still being optimized at the moment, but you do have an idea of what the relationship is between proof size & proving time vs. the complexity of the underlying computation being proved?

And are you doing anything on the calldata compression front?

Thank you again for sharing progress on the Miden front. Excited to see it in action at some point on mainnet