In a previous post, I introduced libkzg, an implementation of the KZG polynomial commitment scheme. This library now supports multi-point proof generation, as well as on-chain verification of up to 128 points of evaluation. In this post, I will describe the new functions pertaining to multi-point proof generation and verification, discuss its implementation, and describe tradeoffs made.

Generates a KZG proof to the evaluations at indices for the polynomial with the given coefficients.

A MultiProof is a single G2 point.

Verifies a MultiProof given the polynomial commitment, as well as the associated indices and evaluations.

_iCoeffs should be the coefficients to a polynomial which interpolates the points denoted by _indices and _values.

_zCoeffs is a polynomial which intersects y=0 for each x-value in _indices.

These polynomials are required to verify the proof. See the appendix for a more detailed explanation.

The contract will ensure that _iCoeffs and _zCoeffs are valid by evaluating them at each point in _index and checking whether the result is a corresponding value in _values or 0 respectively. An alternative method is to perform polynomial interpolation in Solidity, but I have not explored that yet.

Next, it will compute the KZG commitments for _iCoeffs and _zCoeffs respectively. It is able to do this as the verifier contract has 129 G1 values from the trusted setup, stored during deployment.

Finally, it performs a single pairing check described in the appendix.

The contract supports verification of up to 128 points per verifyMulti function call.

The contract costs about 7.3 million gas to deploy. The bulk of this comes from storing 129 G1 points (a total of 258 uint256 values) from the trusted setup on-chain.

The Solidity function verifies two polynomials by evaluating them at each index and checking the result. Is there a way to speed this up?

What are some use cases that would immediately benefit from libkzg? One downside of KZG polynomial commitments is that updates are less efficient than those for Merkle trees, which prevents them from substituting Merkle trees in applications which require them.

What are some ways to more efficiently establish social trust in the structured reference string (SRS) values which this library uses? These values come from the Perpetual Powers of Tau ceremony. Teams which use it should independently verify the ceremony transcript and check whether the SRS values stored in the verifier contract match those from the chosen challenge file. Yet, the transcript is extremely bulky and takes a long time to verify.

Some authors have suggested using KZG commitments as the accumulator for Merkle trees. This deserves a longer post, but for this construction to be gas-competitive, it must beat the efficiency of the Keccack and SHA256 hash functions, which consume 349 and 1586 gas respectively to hash two 32-byte values each. In contract, the KZG commitment function is much more expensive on-chain: it consumes 47496 gas to commit to two coefficients.

Appendix I: the math behind multi-point proof verification

The KZG10 paper describes how to evaluate a multi-point proof as such: 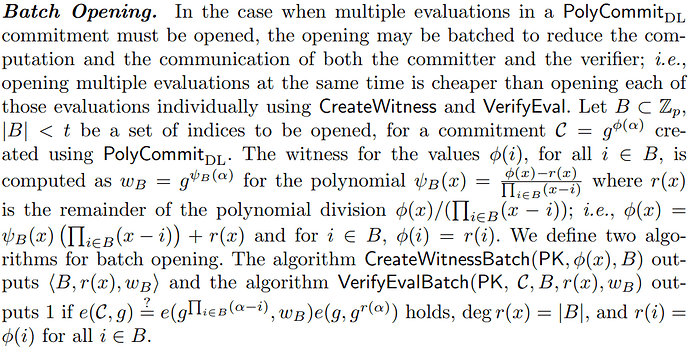 To produce -C - g^{r(\alpha)}, the verifier must also perform an elliptic curve addition operation in G1.