As layer 2s and alternative chains gain traction, we have seen a number of new bridging projects. Some examples are nxtp, Hop, Thorchain, Across and Multichain. Considering the high fees users pay to use these systems, we at Magmo wondered how low we could drive down the cost of cross-chain swaps.

The output of our research is SAFE, the Secure Asymmetric Frugal Exchange. SAFE is a simple and efficient technique for batching cross-chain swaps with the following desirable properties:

While SAFE is a generalized cross-chain swap protocol, the protocol is especially cost-effective in an environment where the transaction fees on the From Chain are lower than the fees on the To Chain. An example of this scenario is a swap from a rollup to L1 Ethereum.

We used the SAFE prototype to compare SAFE to nxtp, which we chose as it also uses HTLCs. Our comparison focuses on 2 benchmarks. In the first benchmark, 100 unique addresses each swap an asset from Optimism to mainnet. In the second benchmark, the swap is from Optimism to an Optimism clone. Note we assume L1 gas cost of 150 gwei.

It should also be noted that nxtp is a more feature rich implementation than SAFE. In addition, nxtp contracts are production code whereas SAFE is a prototype. As a result, we expect SAFE costs to increase as feature are added and contracts are hardened. Nevertheless, the initial benchmarks are very promising! Full benchmark data can be found here.

SAFE in a nutshell

Hashed Timelock Contracts are a proven technique for atomic swaps. 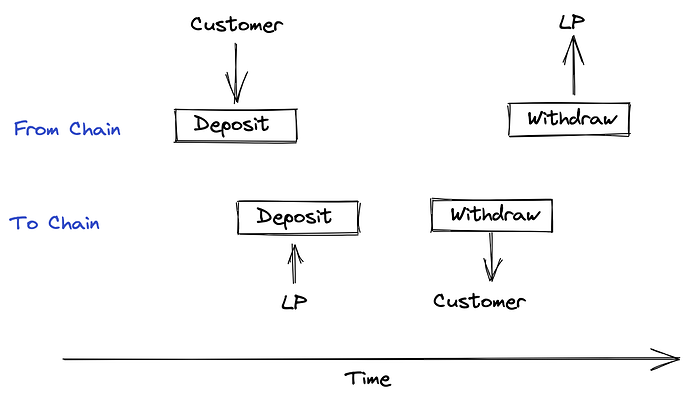 SAFE expands on HTLCs by introducing batching. Batching groups many swap requests on the From Chain into one transaction on the To Chain, making SAFE particularly cost effective in asymmetric cost environments. There are 2 roles in SAFE:

During normal operation, customers continually submit withdrawal tickets to the From Chain. Periodically, a batch of tickets is created and authorized by the LP. The authorized batch is then used to:

In SAFE, the following transactions must take place:

SAFE protects customers against a malicious liquidity provider. The customer must have the ability to monitor and submit transactions to both the From and To Chains. The customer is guaranteed that either:

Details and an informal security analysis are found in the SAFE spec. Obvious extensions to SAFE can include logic on the From Chain to incentivize good behaviour.

As described in the spec, SAFE focuses on asset swaps where one asset on the From Chain maps to one asset on the To Chain. Other projects like Thorchain combine AMM and swaps to allow, for example, swapping native Bitcoin to native Ethereum. We have not explored in detail how to add features like this to SAFE.

In addition, our current contracts do not include the necessary checks to prevent common blockchain attacks. This choice is intentional, aiming for clarity and understanding of the core protocol at the prototype stage.

Nice writeup and great to have useful diagrams for vanilla HTLCs vs. SAFE!

HTLC-like protocols have important security and trustlessness properties when bridging consensus domains. It’s helpful that this work points to potential headroom for further gas optimizations with bridging systems that build on HTLC-like protocols already (for other good reasons).

There’s also an important point that’s useful to highlight in the diagrams. The SAFE diagram illustrates the nice asymmetry (the “A” in SAFE) in the transactions which, during L2 withdrawals to Mainnet, reduces the L1 transactions from the 2 in an HTLC to only 1 here. Batching then provides even more gas savings by amplifying this asymmetry. Minimizing friction from L1 gas costs when moving around liquidity by using synergistic mechanisms is a really helpful protocol research direction!

Nice! Have you thought how fees would fit into this model? If batch sizes are dynamic it might be difficult to give a good estimate to a user at the time they make their deposit.

I think there’s also a simpler variation of SAFE which is applicable to only rollup->mainnet withdrawals but which would remove the need for users to watch for fraud:

This variation involves sending an amount, an id and address for each withdrawal in the L1-to-L2 message, but this could be made cheaper by making it 2-stage. Just a hash of the L1 withdrawals is sent in the message and stored in the L2 withdrawal contract. The LP can then provide the pre-image of this hash on L2 to prove which withdrawals were made.

This variation relies on the atomicity of L1-to-L2 messages, which should be guaranteed by any L2. It also requires the message to be processed before INACTION_TIME has expired to avoid the user withdrawing their funds due to perceived in inaction on the part of the LP.

@yahgwai That’s a very valuable insight! An interesting exercise would be to implement and benchmark rollup-specific SAFE (rSAFE). With rSAFE, the simplifications are:

With regard to SAFE fees, this is a great question. For an LP, the total cost of processing a batch is 2 * FromChain transaction cost + ToChain transaction cost. One approach is to evenly split the batch cost between all swaps in a batch. Or a swap can be charged some portion of the batch cost based on the ratio of the amount swapped to total batch amount. The LP also charges a fee for the service. The total amount the customer receives on the ToChain is swap amount - share of batch cost - service fee.

One option is to introduce user-driven fees. A customer would set the maximum that the swap will pay (for share of batch cost + service fee). The LP can then skip swaps that are underpriced. Note that SAFE currently does not allow LP to skip swaps, but this feature can be added.

Another option is for LP to set a static fee that can be periodically adjusted. This fee can be based on batch sizes over the past day/week/month. Since SAFE is so much cheaper than non-batched swap technologies, it is likely that, at first, the LP can overcharge customers for swaps while remaining cheaper than alternatives. Over time, as the LP establishes a history of swap volume, the LP can set fees that are more inline with cost of running the service + fixed service fee.

Yeah, I think the user-driven fees (although they need to be guided by the LP) or a static fee would be best. The users will want to have a quote for the fee before they deposit into the L2 contract, because they’ll want to compare between different fast exit providers.

Whilst SAFE may be cheaper than non-batched swaps, it’s possible that there’ll be multiple LPs running the SAFE protocol and trying to compete (using fee price and latency) with each other for users.

Completely agreed with the points above! The goal of SAFE is to minimize customer costs, so creating a predictable and competitive fee structure is important research. I would definitely love to hear any and all ideas!

Just want to flag that the SAFE abbreviation might cause confusion for both users and developers in the multi-chain ecosystem - where 10+ chains are using the ‘Gnosis Safe’ as the account standard for holding their assets collectively. I’m part of team there and we also plan to drop the ‘Gnosis’ from the name completely and rename to the Safe protocol. Would be great to discuss how we can minimise user / dev confusion when the timings right in your research.

@kurtz121 Thanks for flagging the name conflict! Gnosis Safe is a well established technology with a great track record. We’ll brainstorm a new name for our research.