During the 1.x workshop in Paris last weekend, a couple ideas have been discussed for the transition from hexary tries to binary tries. It has been agreed that each proposal should be published on ethresearch for comparison and further discussion.

A hexary to binary conversion method in which new values are stored directly in a binary tree sitting “on top” of the hexary, while the “historical” hexary tree is converted in the background. When the process is finished, both layers are merged.

In the present proposal, I am relying on an up-and-coming feature of geth, the snapshotter. I won’t go too much in the details of the snapshotter here, just the general principle:

This method promises a lot of improvements for speed and sync, including the method proposed here to switch between hexary and binary trees.

The base idea consists in laying a binary tree “over” the hexary tree. The hexary tree is then declared read-only:

In the subsequent paragraph, root^{2} represents the root of a binary tree, and root^{16} that of a hexary tree. 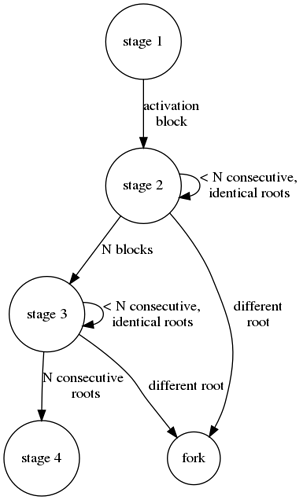 The transition goes through 4 phases:

I believe that this can be done in one hard fork, and some people have expressed reservations about this. I’m looking forward to discussing this point.

This has benefited from the valuable feeback from Sina Mahmoodi and Tomasz Stanczak.

I like the simplicity of this compared to other “gradual merge” proposals!

Could just temporarily abuse extradata for this.

That’s a nice simplification! Moving (key, values) from the overlay back to the main tree in such a predictable fashion is very practical.

The implementation detail to watch out for, is a potential race condition that occurs when a (key, value) move is preempted by a tx from the same block that accesses/writes the same location. Apart from that, it seems pretty straightforward.

Thank you for writing this down! If the migration is expected to take from 2 weeks to a month, does not this mean that any node joining during the migration will no be able to verify the state root of the binary overlay? And no new miners can easily join in?
Or is the two weeks to a month not a requirement? If the snapshotter is used, then perhaps the conversion can be done much faster?

One approach is to just be lazy and say that new miners cannot join during the transition until they compute the entire tree. IMO we should not discount the “quick and lazy” answer, especially if it has fewer corner cases.

I wrote a quick and dirty, unoptimized PR to have a worst-case estimate of how long it would take for geth to convert the hexary trie to a binary trie.

With these preliminary numbers, and adopting Vitalik’s 3rd point method, there should be around two days between H_2 and H_1.

It is indeed a steeper curve for miners to join at this time. Big miners won’t have that much trouble, as the conversion is highly parallelizeable. To smaller miners, though, joining during the transition period will feel like doing another full sync (which it is, in a way).
If these numbers hold for mainnet, small miners would be better off holding for two more days, before fast-syncing.

I just want to add a little clarification.

At the time when we want to switch over, we should assume that geth-clients already have a snapshot database.

Regarding the EIP, my initial thought (I may not have read it thoroughly enough, apologies if so):

So I’m thinking there may be built-in disincentives from actually going through with the conversion?

Phase 2 ends when a sufficient number of subsequent blocks have reported the same value for Hᵣ².

This sounds ‘odd’ to me. If I am a miner, who has not yet calculated the binary trie root, I have no way to actually validate one of those blocks. So as soon as I see one such block at height N, then

It’s a quirky situation, imo, where there’s some game at play, but I’m not sure about the game mechanics here.

But the fact that your value is different from that of the majority isn’t going to make your block invalid during phase 1, it’s just advisory.

This sounds ‘odd’ to me. If I am a miner, who has not yet calculated the binary trie root, I have no way to actually validate one of those blocks.

Rephrasing for the sake of clarity: in this phase, you need not validate the new root, it’s just a vote by some other miner.

I can choose to ignore that block, and keep mining on N (until a binary-root-free N is propagated).

You could do that, especially if you see that your converted value is different from what is being advertised. If a majority of honest nodes behave correctly, they have no reason to follow your new block and you find yourself having to catch up with the longest chain.

I can choose to ignore that block, and keep mining on N (until a binary-root-free N is propagated).

A simpler version, which I believe Vitalik described in his response, is to simplify the process by removing the vote and fixing a block height h_2 “far enough in the future” at which R^{16}_{base} is replaced with R^2_{base}.

h_2 is chosen to leave clients enough time to perform the conversion. With current algorithms, it looks like 2~3 days max.

It has the advantage that removing the vote is a good way to make sure that the vote won’t be gamed.

Some suggestions about simplifying the process (quite a lot, I would think): https://github.com/ethereum/EIPs/pull/2584#issuecomment-621080575

As a summary of the discussion in that PR: @holiman suggests to disable tx writes to the trie for the ~ 45 minutes that the (account) conversion takes. Only coinbase updates would end up in the overlay. The result is that phase 2 could be achieved in a couple blocks.

suggests to disable tx writes to the trie for the ~ 45 minutes that the (account) conversion takes. Only coinbase updates would end up in the overlay. The result is that phase 2 could be achieved in a couple blocks.

In practice: blocks in the conversion phase would be all empty, so the ‘disable tx writes’ is a side-effect, with the consequence that only miners (canon and ommer-miners) are modified in each block.