block-builders are incentivized to censor / ignore Tx to reduce BASEFEE, to make MEV bundles more profitable.
*this post expands on the discussion with @vbuterin during the MEV Salon 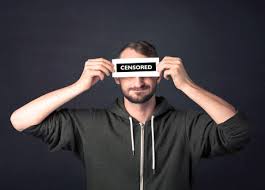 from yesterday he points out that censoring is costly: 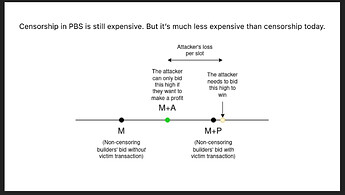 This sounds pretty straightforward, and that it would be too costly for block-builders to censor Tx.

I want to provide additional data on block-builders incentives, which paints a different picture:

So, what should a cut-throat MEV-maximizing block-builder do?
probably one of two options:

The problem is worsen by the fact that each block-builder knows that all the other block-builders are similarly incentivized.

For the record - I think there are ways to improve PBS, some of which we’ve been discussing and exploring (here). And we at bloXroute are running both a “regular” block-builder and a “good” block-builder which avoids front-running.

But I am very surprised that while eip-1559’s economics were thoroughly considered, PBS is being released in the wild and I don’t think anyone knows how things will play out in terms of block-builder competition, economic effects, centralization of Tx flow.

@vbuterin - is my argument clearer now?

Yes, you could obviously set the gas limit in-protocol, but block-builders could still take the 2nd approach. You could then introduce crLists, but if we’re counting on validators altruism, why not just use the crLists for “fair ordering” like Ari Jules is suggesting?
I don’t know, we probably need a spec before we can analyze the incentives and implications of crLists, but I don’t think we can just punt it as a solution.

You could then introduce crLists, but if we’re counting on validators altruism, why not just use the crLists for “fair ordering” like Ari Jules is suggesting?

Since becoming a block builder is permissionless, and defecting from the collusion strategy is profitable, it is unlikely that collusion will actually happen/hold because it just doesn’t make financial sense long term as you have to pay the difference between your under-full blocks and a 2x full block forever to maintain the artificially low base fee. This means that as a builder, that whole base fee that you just drove to epsilon now has to be paid by you to the proposer forever, so you have no incentive to actually do this as you don’t actually benefit from it at all.

I agree with @MicahZoltu here, and to add two elements to the discussion:

These are two simple arguments, I believe more modelling could be done, e.g., writing down precisely the bounds of how much the attack costs during either phase, but it is also unclear to me how PBS changes much from the analysis that was done at the time of 1559 (see Tim Roughgarden’s report, section 7). In the proposer model, a proposer joining the cartel incurs an immediate opportunity cost C vs producing a non-cartel block (C varies depending on the phase etc). In the builder model, the builder could indeed make up that cost C along the way to keep overbidding everyone else, such that greedy proposers always pick this builder, but C increases as the attack goes on. The cartel could also censor blocks built with deviating, honest builders but then it reduces to a classic 51% attack.

Can you expand on the “crList fair ordering” solution? I’ve not heard about a combination of the two (I missed that salon where it was perhaps discussed)

I’m not convinced this changes things significantly, as 1559 was designed to work under pretty heavy collusion assumptions (you only need a very small number of honest/altruistic/defecting miners to break the cartel).

True, you could make the case the other way around too, yes builders are centralised/centralising but it’s also much easier to spin up a new (defecting) builder than a new mining pool

While I can appreciate that argument, it isn’t obvious that the marketing/infrastructure difficulty of spinning up a mining pool are higher than authoring a builder that is MEV competitive enough to actually get successful blocks. The fact that you would be getting up to 2x the fee revenue of cartel builders definitely helps make such a builder more competitive, but it may not be enough depending on the volume of MEV available.

Something else to consider, I think the idea is that all clients will build a local block and compare the revenue from it with builder proposed block and always prefer local over builder if the local block is more profitable. This means that by default, the naive strategy (no MEV extraction) is the baseline that the builder cartel needs to compete with. So if you are building empty blocks, you need to pay the proposer at least 2x full blocks worth of fees at the current fee rate (which increases as the base fee goes down), even if you have 100% builder cartel.

Should we assume zero entry cost in being a builder? Is it possible that a validator enters the builder market at block n and exit the market at block n+1 with almost zero cost?
I first thought that being a builder requires very high system requirements with expensive setup cost, so that the builder market cannot be entirely open, unlike today’s MEV market. Reading the discussions above, I am a bit confused about this assumption.

Thanks @barnabe and @MicahZoltu - these are great points!
So great in fact, that I’ve been mulling over them for days, which is why I didn’t respond.

I’m not entirely convinced though…
I’m not imagining a BBs producing empty blocks, nor the need to actively collude and BBs needing to anonymously defect.
I’m more concerned about BBs quickly pushing gas limit down (5 minutes at 3am on a weekend) and then ignoring 1559’s flexibility and producing up to 15M gas blocks, and delaying low fee Tx until they have room for them. And if priority fees spike - great! build pressure, capture fees, rinse & repeat.

Let me continue thinking about for a few more days - I keep rephrasing the issue in mind, but I haven’t nailed it yet

@wanify - running a competitive block-builder requires executing non-trivial simulations. If it wasn’t the case then every validator would have run their own BB as a backup, but unfortunately this isn’t the case.

I’ll try with a table to formalise the argument, maybe this is helpful to the discussion

Let’s say there is some group of builders, and Alice the builder. In each cell, the payoff is (Alice, other builders), where other builders can be thought of as a single builder. If you don’t like the idea of a collusion, you can replace references to “collusion” by “drive the basefee down by under-filling blocks”.

\Delta measures the difference between the basefee and the market price of gas. Typically, the difference is equal to the nominal “1 Gwei” miner compensation, but assume that it is zero. The longer builders under-fill their blocks, the larger \Delta gets.

By V I mean the value available to be captured by the builder. The larger \Delta is, the higher V is, as users bump up their priority fees to make up for the low basefee.

V_c is the value function for builders who collude, i.e., they are not allowed to make blocks beyond a certain amount of gas G < \text{tgt}. So we always have V_c(\Delta) \leq V(\Delta) (but usually this inequality is strict)

Two claims can be true at the same time:

again, this is not well articulated, just the hunch I’m still struggling to fully grasp

So that’s where I think I disagree. You can think of 1559 as aiming for a given throughput over time. When you artificially clamp the throughput, which you do when you under-fill blocks, you are creating an imbalance, assuming there is always more demand to be served than the throughput can serve (which imo is a fair assumption, otherwise basefee = 0 in equilibrium anyways). Meaning if over 10 blocks you under-fill by 5M gas each, there is 50M gas that the system wants to fill. Of that 50M gas, colluding builders are only allowed to serve < 15M per block they produce, to keep the attack going. Meanwhile, Alice the deviating builder can always make blocks serving 30M gas of user demand.

You may be displacing some of the demand that would have been served at the equilibrium basefee (= market price) and serving it instead when basefee is made low, but along the way, the incentive to deviate is stronger and stronger (in other words the cost of collusion C(\Delta) = V(\Delta) - V_c(\Delta) increases as \Delta increases). The issue is that you as a builder may be willing to subsidise the attack by spending C(\Delta) as long as \Delta is low, as you say, it’s a couple dollars. But you don’t know when you might be able to take profits, if at all. A single deviating builder can rug you of the effort you have personally invested to make this attack work. And assuming the demand process is stationary + in an efficient market (users update their PFs along the way), there is as much money to be made on the way up, when someone deviates and resets basefee to its equilibrium market price, as there is cost to spend on the way down, clamping blocks to make basefee go to zero but expending a little extra to puff up your bid to the proposer. So it’s not even the case that you can “make back” the expense of the attack if someone deviates before you start exploiting the low basefees and taking profits.

FWIW, MEV being worth significantly more than fees/attestation rewards is definitely a problem as it can lead to selfish mining becoming the optimal strategy (I haven’t checked if this still applies under PoS or not). However, the presence of 1559 base fee actually reduces this because it reduces the value of transaction fees relative to attestation rewards.