At some point I over generalized atomic swaps for Crosschain communication. So just skip to the bottom. ctrl+f “#latest”

I’m doing some research into scaling and I want to be sure I am understanding this 100% clear.

I’ve asked around but I still don’t believe it.

So I can atomic swap an asset to a sidechain in a fully decentralized manner. Is that really true? Are there any attacks that can be performed to interrupt the atomic swap?

What does the receiving chain look like? Is the code different than a typical blockchain? Should I just copy a p.o.s. chain to start?

Other than $51% attacks, are there any other weaknesses to p.o.s.?

Other than $51% attacks, are there any other weaknesses to p.o.s.?

No trustless light clients. Which, you know, might be useful for a dex.

You can DoS atomic swaps in some cases. Solved with timeouts / locktime (so they remain atomic). Not a great soln. You can DoS if you can prevent tx confirmation (for a specific tx).

No, tho you could build a pegged token service on atomic swaps. They work for arbitrary tokens. (eg BTC <-> LTC)

So if I’m understanding you correctly, I can create a token on the mainchain/parentchain, and have that asset transferred to a sidechain. This is possible. Wow. It would seem that the sidechain would have to have a peg though. You say no, can you help me better understand? If someone atomic swaps an asset to another chain, what are they getting? or is that the situation in which you get a peg token?

I just realized I must have confused atomic swaps with another technology. I was caught up in the whole idea of “transfer” between different chains. Maybe it’s still relevant. But what I’m trying to do is take a token from mainchain and transfer it to a sidechain. Which I believe mainchain would have to “lock” the asset, just as the sidechain created a peg version.

For this to work mainnet is going to have to implement a protocol that can communicate with a sidechain.

Here is a proposal for crosschain communication.

Public blockchains such as Ethereum and Bitcoin do not give enterprises the privacy they need for many of their business processes. Consequently consortiums are exploring private blockchains to keep their membership and transactions private. Ethereum...

It also seems like plasma can help integrate this solution. Which someone brought up earlier but I wasn’t very knowledgeable about it. It would require back and forth communication between nested plasma chains. Which I believe is possible, but I think this was brought up as a UI issue. (Not if each transaction at each layer was automated if ascending and descending the layers was necessary)
https://blockchainatberkeley.blog/plasma-isnt-dead-7d0b8c16ad2e

Ultimately, all I need is for one blockchain to be able to read another.
Testnet is up for the smart contract that creates & maintains the distributed token.

Okay so basically. The only thing left for me to do is clone a plasma chain and make its proof of stake backed on a token created from parent chain.
This sounds much more feasible than what I first invisioned 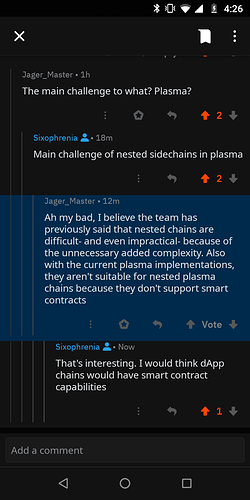 Well. this is what if found out most recently. So apparently this guy wasn’t lying. apparently it’s hard to do smart contracts on plasma 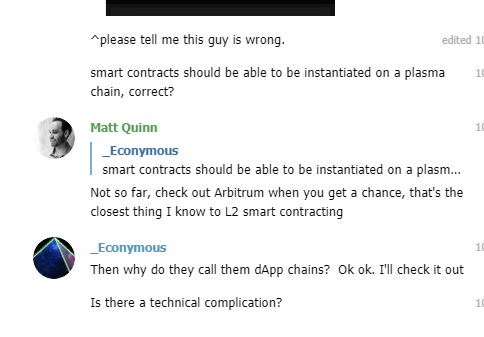 Well, it’s as I thought… Security degredation at each layer… Yeah, that’s what I’ve solved 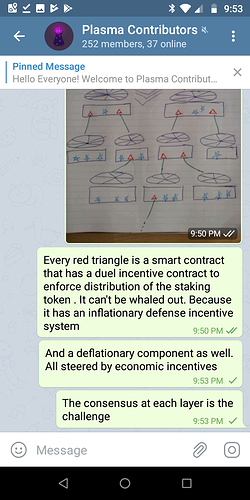 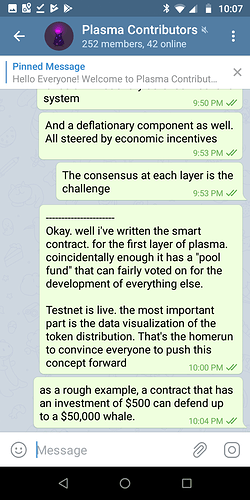 Dear Diary,
alright, I think I finally found what I need

Documentation for Developers, Validators, and Open Source contributors to the SKALE Network

I am looking for a sidechain repo to fork. I searched on GitHub but I don’t think I’m looking at what I need. These things seem to be super rare

so validators. that’s the chain to chain communication. a bit of a manual process.
ok. that detail I missed.

I wonder if chain identity can be achieved in a similar way to node identity in a network. If so, there’s potential for Interoperability at the protocol level

When you are talking about atomic swaps, classic atomic swaps usually work when there are two different parties swapping. One can do secure atomic swaps accross any chains (such as sidechains).

Since you need a counter party, to move your money to another chain you would need to to have some type of a market maker on each sidechain you can swap with, but it is totally possible I guess.

So just recently I figured out how sidechains work
Validators.

I don’t need a “BTC to LTC” type of atomic swap.
just the sidechain locking contract and validators to unlock the assets.

now i’m just looking for a good repo to fork.
there are some modifications I’ll need to make to the validator contract, but that should be about it. maybe the node software as well.