This post describes a possible alternative paradigm to two-slot PBS for designing proposer/builder separation mechanisms. The basic philosophy of this approach is simple: take MEV Boost and replace the relayer with a size-256 committee of validators. 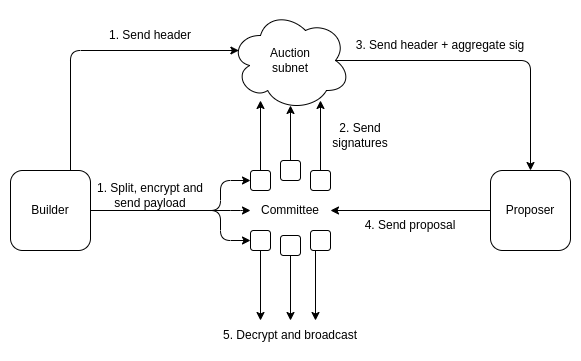 Simplified diagram of this proposal

The above diagram assumed a non-sharded chain. There are two natural ways to make this scheme work with the 32 MB payloads of sharding:

When a builder makes a payload of size N, this imposes:

The second can be managed by splitting committees into many subnets, and the third can be managed by making sure that there are not too many payloads (eg. allow each builder to propose a max 3 per block, and increase the min deposit to be a builder). As a practical example, if there are 100000 total validators, and there are 1000 size-1-MB payloads, then the per-validator downloaded data would only be 10 kB.

Advantages of this proposal vs two-slot PBS

Disadvantanges of this proposal vs two-slot PBS

1.) Is the builder here a first-class citizen in the protocol? (i.e. validator)

2.) Does this affect danksharding? if yes, what are the positives and negatives? I guess one positive is the notion of the committee is there already and we can just increase TARGET_COMMITTEE_SIZE to 256