The language design, that on EVM v.s. that on Others

I am analyzing a compiler which was called Bamboo Compiler.

For me, the design was something unreadable and it was an incomplete model as an escrow language.

Now, I clean up and aliasing the former work and I put it on my github as pen compiler project. 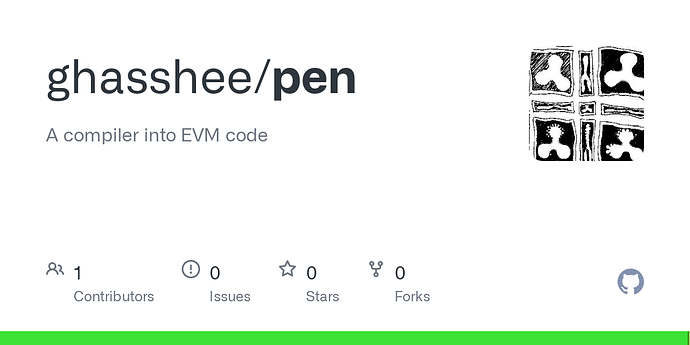 A compiler into EVM code. Contribute to ghasshee/pen development by creating an account on GitHub.

Bamboo does not have loops in the language design, claiming that we do not need loops because we have gas limit in the execution.
I think this is not the word of those who create a User Friendly Language.
The dijkstra’s Guarded Command Language(GCL) is a way of defining formal method and solving this kind of problems. GCL is translated into Program Graphs easily.

It is compiler that transform loops into a safe finite sequences of opcodes.

This might allow us to use loops in the language design.

Unlike Bamboo, I would like the approach of Functional OOP language design which is developped by B.C. Pierce and so on around 90’s, which is the original model of Objective Caml.
I heard that Bamboo cannot fill the gap between escrow language which @pirapira pursued and the EVM design which is quite similar to OOP design.

I would like to see and borrow ideas from a lot of projects now going , e.g. michelson in Tezos.

I found Bamboo compiler lacks some of EVM opcodes like CALLCODE which I believe caused the parity bug. I do not know now, how to avoid this operation called from some sender, and in the design of Functional OOP. The first thing is to do the whole design of FOOP on EVM roughly.

Recently, a team on tezos language developped a formal way to anlayze the language in order to grasp if the language terminates as intended.
This is done by applying Refinement Type to the Stack. Refinement Type can have a “predicate” on every Type. We can have every subset of every type as a set with applying the predicate.
Thus, type checking on the type of stack contents is exactly formal vericafition of the program.
( However, this type checking sometimes does not terminate if it has second-order logic. )
The implementation depends on SMT solver for the computation of the logical part.

I would like to know much more about language designs.
If anyone know about them or interested in them, feel free to let me know !

There are bunches of unneeded definitions / corrupted designing in Bamboo

The design of Bamboo seems fully unreadable and full of useless designs.
An ordinal type theorist would not write codes in such a way.
Pen is going to be a much simplified and sophisticated version.
And let’s try to make typed functional programming languages on evm.

The Bamboo Compiler turned out to be a useless compiler in terms of formal verification.
The guard code 'reentrance` in Bamboo does nothing in creating contracts.
Unlike, type checking in a single computer which has a single user, EVM has bunches of users who use the function. Thus outside checking process does not guarantee the safety. Rather, we must have the guard condition inside the contracts.
I have remembered someone pointed out the uselessness.

It’s just a compiler.
There is no formality on it.
Thus, that means pen also has no formalities in terms of contract safety checking.
We have to make them from the bottom.

And I warn NOT TO USE bamboo at all. (maybe you know well)
It’s fully useless because it’s designed lacking the ability of designing formality at all.
If tests are done correctly, this must be avoided, and all the source code looks like this.

I concluded bamboo is an insane compiler as its unreadability indicates.

Pen compiler is planned to have “Internal Type checker” .
This is a new type of type checking.

( I have not run the code on any EVM yet. I Just made the compiler itself. )

( Linear Type checking is not yet supported.
Now we are going to the phase of development of the formality as written in https://bentnib.org/quantitative-type-theory.pdf and TaPL (Pierce 2000) )

EVM decompiler, yes it’s decompiler! , is now available in pen repository!
It’s at the alpha version!
You can compile it after installing Haskell;

This is going to be used to develop pen compiler in the purpose of analyzing Solidity’s bytecode directly.
The architecture of pen is not solidated yet;
in a ‘Contract Oriented’ Langauge, a contract can call itself recursively,
which was @pirapira’s attempt, while solidity seems to have chosen the other way; contracts cannot call itself recursively.

Awesome! Solute to your ambition.

Recently, i am reading the book TaPL, thinking about whether i can contribute to smart contract language!

After searching, i saw your amazing work, thank you for your efforts, and then I will study the design of the pen compiler and try to make contribute!

So, if you can, if you have the time, could you please write an introductory document for new developers of pen compiler. I think documentation will greatly help the development of the pen compiler.