Hello, I was brainstorming a trustless withdrawal process for pooled staking in eth2.0. Two things to note:

Furthermore, I understand the cost of many of the required ops (BLS verify onchain) may stray from making this pragmatic in which case this is purely an academic exercise.

At the moment I am focusing solely on the withdrawal process. 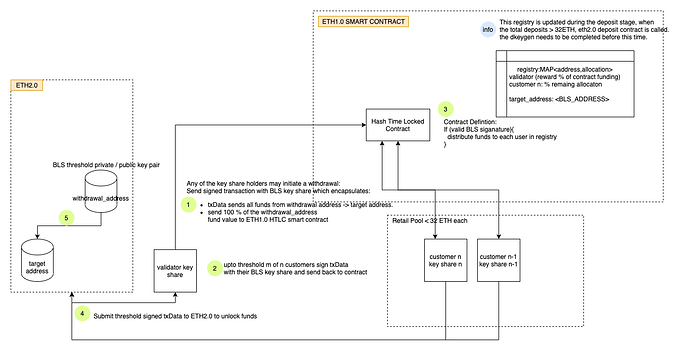 Not discussed and needs more thought:

My understanding is that if balances on eth2.0 layer wont match balances on eth 1.0 layer you must either mint ethers on eth1.0 or provide swap mechanism.
Do you consider that mismatch during your research?

Thanks for your comments, by balances not matching, do you mean the value of eth2.0 and eth1.0 native currencies? Unfortunately there is an arbitrage window against the node that initiates withdrawal between the point it initiates a withdrawal and the time threshold signatures are collected.

This started as a thought experiment (however impractical) that the current eth2.0 architecture can support pooled staking (with varying security guarantees ), but without outright introducing a trusted escrow party. Hopefully it can inspire more thought and discussion about making staking more accessible.