There are currently approximately 450 000 Ethereum validators.

They could be used for additional tasks, for example validating not only L1 Ethereum, but also L2 and L3 “Official Ethereum Rollups” : 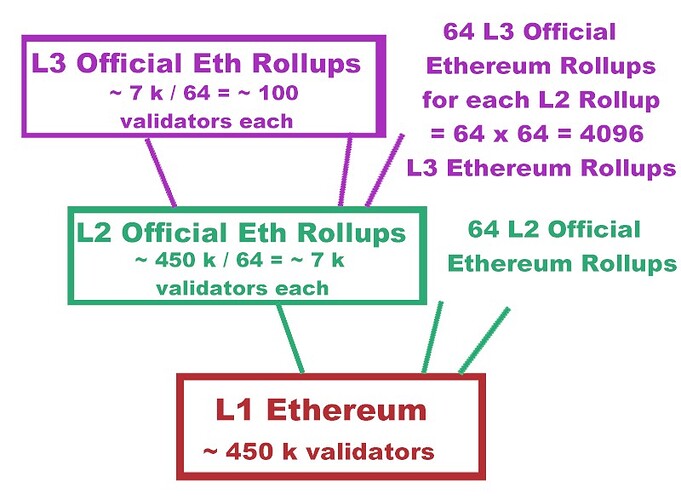 The security level would be better than current “unofficial” rollups, because if some validators don’t fulfill their L2 and L3 tasks, they could face a ban or a slash.

Each layer would have its own role :

Zero fee would be reachable on L3 Official Ethereum Rollups, because the maintenance cost would be very low :

More, these ads could provide long term resources to the Ethereum foundation.

Online ads are a major source of revenue for organizations whose wealth rely on information, like Meta, Google, Tiktok, …

Online ads running on the L3 client and offering zero fee transactions could become a major source of revenue for the Ethereum foundation.

here are my thoughts:

having 64 + 4096 different rollups all considered “official” would break composability and introduce a lot of fragmentation, without granting a lot of benefits (AliceDEX is on rollup 3619, but my Ether is all on rollup 1447 and the MuchWowDogeInu2.0Moon token is only deployed on rollup 1104! what do i do???)

about the ads on the L3 client: how do we enforce this in FOSS software? what if a community project builds a client that doesn’t have ads in it? how do we check? how do we prove it without adding more centralization into the mix

ty for the quick response,

atm the ethereum proposed way of sharding is just danksharding (data storage sharding), afaik we aren’t sharding the execution layer any time soon so no fragmentation as it would ruin the UX

The fact is that a monolithic blockchain is too heavy. It needs to be fragmented. Fragmenting in 64 + 4096 different rollups seem to be a lot, but it means that L3 rollup chains will be lighter, enabling them to be stored easily on an average computer, on event a smartphone.

i believe proposer/builder separation will make things better so validators/proposers won’t need to store a load of data, rather itll just accept bids from builders, plus light clients are being championed which are meant for mainstream users. not everyone needs to run a full node

This fragmentation may be reversed in the future, if technical solutions emerge to store easily much more data than currently. Reorganizing a large amount of data is possible.

(this is my quote) on L2, computation is cheap but calldata is as expensive as on mainnet due to data availability requirements, so moving to L3 wouldnt really do much for that. validiums would grant you the power you desire at the cost of decentralization (i believe proto-danksharding/EIP-4844 will blur the line between rollup & validium)

you havent addressed that L3 is pretty much useless over L2 when trying to optimize gas fees, check out What kind of layer 3s make sense? by vitalik buterin

“you havent addressed that L3 is pretty much useless over L2 when trying to optimize gas fees, check out What kind of layer 3s make sense? by vitalik buterin”

But some problems may occur : “There’s always something in the design that’s just not stackable, and can only give you a scalability boost once - limits to data availability, reliance on L1 bandwidth for emergency withdrawals, or many other issues.”

Yet, the article confirms that you can scale computation with SNARK : “SNARKs, can scale almost without limit; you really can just keep making “a SNARK of many SNARKs” to scale even more computation down to a single proof.”

Regarding computation, the proposed model of L2 and L3 Official rollups is therefore possible, with a Zk-Rollup implementation.

The problem of data availability is more complex, as the article explains : “Data is different. Rollups use a collection of compression tricks to reduce the amount of data that a transaction needs to store on-chain: … About 8x compression in all cases. But rollups still need to make data available on-chain in a medium that users are guaranteed to be able to access and verify”

There are solutions to increase data availability in a context of rollups on top of rollups.

An article on Coinmarketcap about EIP-4844 explains : “it has been proposed that the data can be stored elsewhere in a way that it is easily accessible like several applications/protocols that provide that service.”

To increase data availability, a solution would be to store data elsewhere, not only on the compressed blockchain. Blockchain is basically a security measure intended to secure transactions, so they cannot be modified.

But the data could also be available elsewhere.

L1, L2 and L3 blockchains could have a buffer for data availability. In this buffer, there would be a list of all the addresses of the blockchain with their balances in real time, and a list of the characteristic of the smart contracts implemented on the chain. These buffers should have enough information to validate new transactions without having to do expensive calldatas on the blockchain, at least most of the time.

If the buffer is too big, it could be sharded between nodes operating on the same blockchain.

Being uncompressed and easily accessible, the buffer would solve the problem of data availability.

atm the ethereum proposed way of sharding is just danksharding (data storage sharding), afaik we aren’t sharding the execution layer any time soon so no fragmentation as it would ruin the UX

Rollups can be seen as a way to shard the execution layer. Some rollups are popular, and this fragmentation doesn’t ruin the UX.

Regarding data sharding, there is a consensus that it is necessary, because the monolithic L1 chain is too heavy.

“i believe proposer/builder separation will make things better so validators/proposers won’t need to store a load of data, rather it ll just accept bids from builders, plus light clients are being championed which are meant for mainstream users. not everyone needs to run a full node”

Yes I agree that validators shouldn’t be required to store a lot of data. Once data is sharded, one way or another, it will be possible to run lighter clients.

In the case, very hypothetical, where a fragmentation of data should be reversed, it’s possible to add an identification linked to the original shard.

More, if there are official L2 and L3 rollups, it may be possible to shard the addresses. For example, a certain range of addresses could be assigned to L3 rollup n°1, another range to L3 rollup n° 2, …

This is a x1000 factor compared to the current situation. It may be possible to reach such scalability with L2 Rollups, or other L2 solutions, but models with L3 rollups should also be considered.