Our team at Hyper Oracle has been working on building the foundation of proof-based data infrastructure. We proved Ethereum PoS consensus with zero-knowledge and recursive proofs, as well as implemented Halo2 pairing for verifying BLS12-318 and BN254 curves, which can be handy for zk-based bridges and other applications seeking performance and Halo2 stack. Here we share our research findings, design choice, and analysis. We have open-sourced the library so we can optimize and develop further together!

To avoid confusion, we need to emphasize that the “attestation” in this section is essentially the zkPoS Proof of a global state of Ethereum consensus we have realized, instead of the local representation of votes for a particular block in Committee Attestation.

Before understanding zkPoS, we need to know some basics of different definitions of blockchain nodes.

In Ethereum PoS’s context, an easier framing of blockchain nodes is:

We will then only focus on Light Clients because it’s impossible for ordinary users to run Full Nodes. Apart from “ordinary users,” these scenarios are only limited to Light Client-like nodes: Mobile, Browser, and On-chain.

Light Client also has different types. They can be classified as verifiers for various usages: 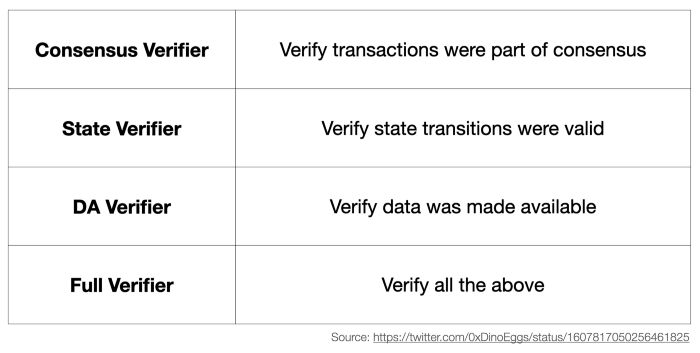 Note that Consensus Verifier Light Client still needs to trust other nodes on the whole consensus. Since it can verify proofs, we conclude that it can also verify ZKP of the entire consensus of Ethereum PoS.

In Hyper Oracle’s vision, we are aiming at end-to-end trustlessness.

We need to implement Light Client that verifies the whole consensus of Ethereum PoS. In Ethereum’s Roadmap’s The Verge, it is also called “SNARK-based Light Client”.

The advantages of zkPoS Attestation are:

This super-powered Light Client will verify ZKP of our zkPoS Attestation (or zkPoS Proof). It can be simply run in web apps or plugins in the browser. Verifying zkPoS Attestation enables accessing and syncing valid block headers.

After that, we can grab the receipt, state, and transaction roots with the valid block headers. For example, we follow the pipeline of receipt root, then receipts encoded data, and finally get contract events based on receipts raw data with Recursive-length prefix (RLP) decoding.

The algorithms of PoS are very complex and difficult to be described in a simple diagram or a single paragraph. Also, implementing them in a ZK way requires a lot of engineering work and architectural considerations (just like zkEVM). Therefore, to implement zkPoS, it is necessary to split up the components and conquer them one by one.

The most prioritized algorithm of zkPoS is the Block Attestation. In another term, verifying BLS signatures with Pairing is the most crucial part of zkPoS. We will cover this part in detail in the later sections.

In a nutshell, for Hyper Oracle’s zkPoS, we will implement these algorithms of Ethereum PoS:

A random seed before a few epochs will determine the proposer of each block.

One of this algorithm’s underlying components is the shuffling algorithm, which will also be applied in the next logic.

Every epoch, with the random seed and the shuffling algorithm, the whole set of validators is reshuffled into different committees.

To leave the validator set and withdraw the balance, a node has to enter exit queue for no less than 4 epochs. Such validator exiting can be triggered by voluntary exits or slashing for misbehaviors.

In particular, validators with an effective balance lower than 16ETH will be inactivated.

A block is attested only if the corresponding committee members of the epoch have a majority (i.e., 2/3) of votes in favor of the block.

This is realized in the form of aggregated signatures and bit-strings standing for the votes where each bit is 1 if and only if the corresponding validator votes. 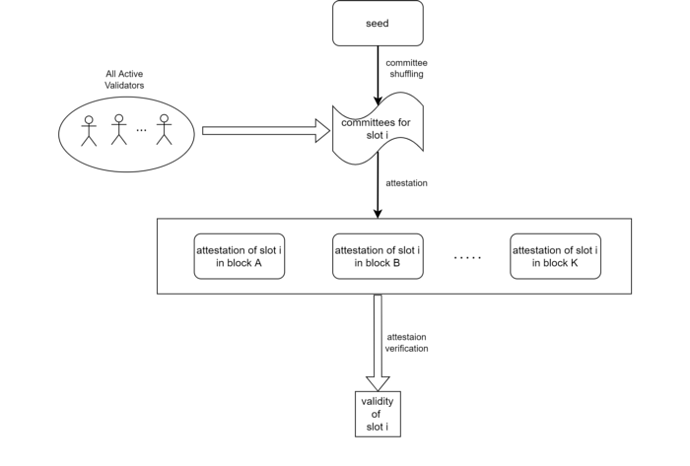 Note that the variables and reasonings illustrated in this article are the most significant components, but more is needed for fully attesting a block. For example, the randomness and the effective balance are not generated trivially.

Randomness is referring to the process that a signature (randao_reveal) is mixed into a random source (randao_mix) in every block to determine the random numbers after certain blocks.

The effective balance of a validator needs to be constantly updated and validators with insufficient balance will be deactivated.

e) zkPoS in One Graph

Due to the complexity of specifying the existing PoS of Ethereum, we provide this figure summarizing the above logic. The two columns represent the data corresponding to two adjacent blocks.

In particular, the first block (on the left) is a checkpoint. The figure includes the necessary (not sufficient) algorithms for the state transition from the checkpoint block to its next block.

Each arrow corresponds to at least one constraint to zkPoS Attestation. 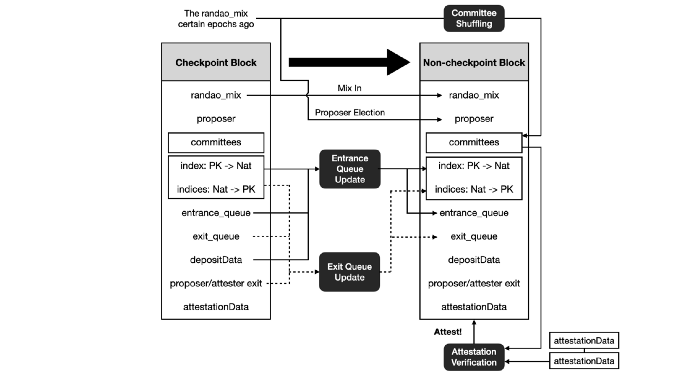 In this figure, we have omitted both effective balance and the Boolean array indicating whether an index is active for simplicity.

a) BLS Signatures in PoS

Here are some thought processes why BLS with BLS12–381 is chosen: 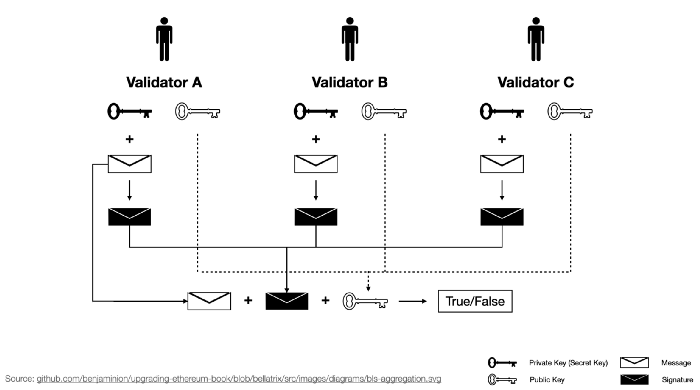 In our previous sections about Light Clients, we know that our most common scenarios are Mobile, Browser, and On-chain. In these scenarios, verifying computations, including aggregating public keys and verifying BLS signature (elliptic curve additions with pairing check), is expensive. Luckily, verifying ZKP, or specifically, zkPoS Attestation is cheap.

Verifying BLS signatures with the BLS12–381 curve is one of the critical components of zkPoS Attestation.

The computing power needed for such expensive verification can be outsourced to zkPoS Attestation prover. Once the proof is generated, there’s no need for other computations.

Then, again, clients just need to verify a ZKP. That simple.

381 in BLS12–381 is the number of bits needed to represent coordinates on the curve.

The curve of BLS12–381 is actually two curves: G1 and G2. Other than diving deeper into the Math part of these curves, some engineering decisions on BLS signature are:

The elliptic curve pairing between the two curves is called a bilinear map. The essence is that we map G1 X G2 → Gt. You can learn more in Vitalik’s post.

In simpler words, pairing is a kind of fancy multiplication we need to evaluate BLS signatures. The pairing is what we need for our verification part of BLS signatures of zkPoS Attestation.

There are many open-source implementations of pairing on BLS12–381. They are the essential components for implementing verification of BLS signature:

Also, some implementation with ZK languages:

With a design choice of zkWASM, we considered the fitness of existing implementations:

circom-pairing provides a great PoC implementation of pairings for BLS12–381 curve in circom. And it is used for BLS signature verification in Succinct Labs’ Proof of Consensus trustless bridge.

And the reason we don’t use circom-pairing are:

In simpler words, if we have to use circom-pairing for BLS signature verification, some short-comings for us mainly are:

The differences illustrated are:

Our final stack is that zkWASM for customized logic (for zkGraph), and Halo2 Pairing as foreign circuit (for BLS with BLS12–381). It satisfies both generality (for user-defined zkGraph) and performance (for the entire zk system).

We are thrilled that we have our own implementation of Halo2 Pairing Library (possibly the first open-source implementation out there), ready to power zkPoS Attestation. It is open-source and you can check it here. Below is some more technical details and benchmarks.

Another critical point of zkPoS is recursive proof.

Recursive proof is essentially proofs of proofs (verifying proof A when proving B), which our Halo2 Pairing can also potentially play a part in because BLS12–381 is the “zero-knowledge proof curve.”

b) Why Recursive Proof for zkPoS?

When dealing with a chain of blocks’ consensus, the need for recursive proof amplifies.

I. Recursive Proof for PoW and PoS

For a network with PoW consensus: Starting from the highest block, we will recursively check its previous hash, nonce, and difficulty until we reach the start block we defined. We will demonstrate the algorithm with formulas in the next section.

For a network like Ethereum with PoS consensus: The case will be more complicated. We need to check every block’s consensus based on the previous block’s validator set and the votes until it’s traced back to a historical block with no dispute (like the genesis block of the Ethereum PoS beacon chain).

The following figure illustrates the effect of recursive proofs for consensus attestations in compressing more information into a single proof, taking PoW as an example.

III. With or Without Recursive Proof

Without recursive proof, we will eventually output O(block height) size proofs to be verified, namely, the public inputs of every block attestation and the proofs for every block.

Remember, we are dealing with “light clients” (browsers) with more computation and memory limitations, even though each proof can be verified in constant time (say, 1 or 2 seconds). If the number of blocks and proofs adds up, the verification time will be very long.

For Hyper Oracle, there may be cases of cross-many-block automation that need to be triggered in scenarios like arbitrage strategy or risk management bots. Then a recursive proof for verifying PoS consensus is a must for realizing such an application.

This section has been simplified for ease of presentation and understanding and does not represent an exact implementation in practice.

In theory, for applying recursive proof for sequentially two chained blocks, the attestation for PoW‘s case (PoS’s case is too complicated to be written in one formula) will be like this illustration:

After changing the intermediate public variables (namely, h_1, pk_2, and preHash_2) into witnesses, the two proofs can be merged into one proof, as shown below:

We can observe that the public inputs are only h_2, pk_1, and preHash_1. When there are more than two blocks, say, n blocks, we can apply the same technique for n-1 times and fetch a single proof for all the n blocks while preserving only the public inputs of the first pk_1 and preHash_1, along with the final block hash h_n.

A similar algorithm to this PoW example for recursive proof will be applied to keep Hyper Oracle’s zkPoS Attestation succinct and constant with arbitrary block numbers. Note that the customization logic for zkGraph is not included in this recursive proof in the current stage.

To wrap up, Hyper Oracle’s zkPoS implementation is based on our unique tech stack of:

Hyper Oracle is excited about realizing end-to-end trustless indexing and automation meta apps with zkPoS and making the next generation of applications truly decentralized with our zkMiddleware, to power a end-to-end decentralized Ethereum dApp ecosystem.

Exciting proposal. I believe the proof size can be constant, and, with this technique, light clients will be able to access an arbitrary chain state with a short proof.