We already know the importance of borrowing in terms of improving infrastructure and therefore quality of life and so forth. For example, borrowing underpinned sovereign finances in early-modern Europe.

Interestingly, primary sources attribute the financial stability (during this early-modern period in Europe) to borrowers being able to predictably repay their debt (van Bochove, 2014).

In terms of reliably repaying debt, I do see a handful of Ethereum lending applications which are underpinned by over collateralization. So it appears, at this reasonably early stage, that secured borrowing is viable. Simply put, the risk of loosing collateral seems to be enough to ensure that borrowers are predictably repaying their debts.

I am curious whether anyone has pursued/researched the following question … “is it possible to create unsecured borrowing between anonymous accounts, on a trustless, censorship resistant, permissionless network”?

Whilst this problem could be addressed via a social mechanism i.e. lenders mandating that a friend or family member go “guarantor for the loan” (which kinda swings back towards the secured loan side of the fence) I am very interested in learning about the possibility of a technology based solution to this unsecured borrowing.

Any questions, resources, ideas would be greatly appreciated.

This might might be a bit cringe example, and probably this would be illegal in most jurisdictions, but there was a lending platform in China, where users were supposed to upload their nude photos (really). In case when they didn’t pay, the photos were published.

But this idea may be generalized. There might be some asset of no financial worth, that users still don’t want to lose. It may be something as simple as personal data. If you don’t repay the loan, your data is published.

Other things that may be taken hostage: passwords to social platforms, contact data to friends (that would be bombed with the information that this individual didn’t repay the loan), items in RPG games or some kind of virtual identity.

We could also resort to good old legal instruments. The user could simply fill in a cheque (or some electronic equivalent) and post it in encrypted/hidden form. If he doesn’t repay, the cheque is decrypted/published and may be used for legal action.

Hi @haael,
Thank you for your reply, you have added some awesome new ideas which are greatly appreciated.

Perhaps the most valuable message weaved through your response is that consequences are a vital factor in solving unsecured borrowing on Ethereum.

Just my way of getting thoughts out into the open.

I have separated my response into sub sections (key words) because I like to separate my thinking in order to ultimately reason from first principles. Here goes … firstly, reliability.

Reliability
The literature says that the ability for a borrower to repay loans reliably is paramount. This may have worked historically in historical societies but not here. My thoughts around this point are that any amount of reliability can still constitute a long con. A long con, where the borrower will gain the trust of lenders with the primary goal of eventually stealing from them; an inevitable net gain for a borrower (at a lender’s expense).

Anonymity
I would suggest that in a trustless, censorship resistant, permissionless network, users are never officially identified. An official user-identification service could only work if it were run by a trusted organisation (which would most likely be centralised in nature).

Trust
I think it is safe to say that an increase in anonymity, creates a decrease in trust.

Risk
Following that logic, it is then safe to say that a decrease in trust, translates to an increase in risk. So in essence, the main issue with unsecured lending on Ethereum is the risk of the lender not getting repaid.

This is a sketch of the positive consequence which could drive unsecured borrowing on Ethereum. It all hinges around a loan contract that can mint and burn tokens.

If loans are repaid:

If loans are not repaid:

Please note: The percentage below can be tweaked, this is just the basic skeleton of the idea.

The following is the state of the situation. Alice has no Eth and there are 4 potential lenders:

The contract is now ready to start the lending/borrowing process:

The following is the state of the situation

The contract now releases the funds:

The contract now creates a new Uniswap pair of Eth:LB (if it doesn not already exist) and adds liquidity at the ratio of 1:400 (Eth:LB_1).

Borrower_1(Alice) then also receives the 400 LB tokens from the loan_1(Contract).

This is what a successful repayment scenario looks like:

This is just a preliminary run at this idea, percentages can be tweaked, does anyone have any other ideas about how to achieve unsecured lending? Thanks so much!!!

What’s to stop a bad actor from repeatedly borrowing and defaulting if they don’t care about earning LB? A rich or ideologically driven attacker would not be properly incentivized. Perhaps the lenders don’t mind (or even prefer) this scenario as they are still earning (appreciating) LB.

Thanks @TheCookieLab,
That is a very good point which has inspired more thinking.

I have created a list below which outlines some new tweaks to the design, in order to make it more robust and less vulnerable to a rich or ideologically driven attacker. Thank you for your input, much appreciated!

I will write up this new design and create another post (perhaps with diagrams). This was just meant to be a discussion but I am actually thinking that we can code this up and test it; seems quite logical and doable.

Thanks again legends!
Any more ideas/comments are welcome

Thank you for your input thus far.

Please see updated tables below. The column to the far left represents an event (one event per row)
The other columns represent the balances of the different entities i.e. the smart contract, the borrower, the lender etc. The loanable currency has been changed to DAI for stability. The “loan/borrow token” for this design is still called LB

Just one borrower and one lender to keep table simple

Shows how total supply of LB tokens increases from 0 to 30 because of new borrower activity.

If clearing transactions for the unsecured borrowed funds took time or were otherwise segregated, we could provide a mechanism in which there is a default event. The counter-party of the these transactions would then have to assume some risk that the creditor would eventually reclaim a portion of their funds.

By looking at a graph of counter-parties which accept transactions with low-default rates and senders of those transactions, we could start to compute a per-account risk score. In the end this might just mean that the counter-parties were doing some sort of KYC or other risk limiting measure, but the creditors do not have to be involved with that process.

Thanks @bradleat,
It would be great to serve a negative consequence to the account address which does not repay a loan. I have not figured out a way to achieve this as yet.

I have been thinking that the contract could maintain a state of “niceness” whereby the contract has the ability to increase or decrease the ratio of:

Are the plain borrower’s actions a foregone conclusion?

Whilst it may be inevitable that plain borrowers will run off with the money 100% of the time, it may just be the case that, during a given round of loans, some (or perhaps all) of them will repay; in which case the contract will increase “niceness” and offer a slightly larger amount of plain borrower positions (per round).

If the plain borrowers repeatedly run off with the money then the contract will reduce those plain borrower positions (and perhaps even the borrowable amount) to an absolute minimum for as many rounds as required (i.e. until a plain borrower actually pays back their loan).

LB Token supply (the right balance of minting and burning)

The trick is to find the correct way to control the LB token supply. A clever design of minting and burning based on borrower actions (honest vs dishonest) should suffice. The LB token is the economic driver (incentive) for lenders to participate and for borrowers to be honest. LB tokens must be rare enough to have value and there must always be enough liquidity in the DAI/LB pool so that borrowers can buy LB and lenders can sell LB.

I think it is safe to say that dishonest users will just come to the platform with a newly generated account address each time (posing as a new honest user). Definitely open to the per account risk approach and also Know Your Customer (KYC), however this does lean away from the permissionless and censorship resistance attributes of a decentralised network such as Ethereum. Instead, if there is a combination of maths, game theory and tokenomics which would work, then I would be inclined to choose the later over the former.

I really like your idea of making other parties aware that they are accepting value from a borrowed loan agreement.

There would definitely be types of transactions where this unsecured lending would be better suited i.e. a business selling food would not use this because they can’t re-coupe the food after the customer has eaten and left.

However, a business selling/renting a fixed asset (renting a house) or an ongoing asset like a gym membership would be a good use case i.e. in the case of the fixed asset, the authorities could accept evidence that the house/rent payment was not legitimate. In the case of membership, the gym would simply cancel the ongoing membership etc.

Basically this new thinking takes the challenges of KYC, reputation, loan-guarantors, collateral, trust and “the long con” etc. and solves them by making this a 3-way interaction (as apposed to a 2-way interaction).

In a 2-way interaction on the blockchain the borrower can just run off with the money. This is like receiving cash in the hand. However, in a 3-way interaction there is an organic and natural relationship between two of the entities; the B2C or B2B relationship takes care of the anonymity element. Whilst the customer is now still able to lean on a lender from time to time, they are not in a position to re-sign up to the same Gym again and again under different IDs. 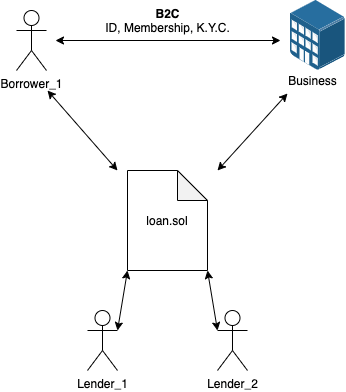 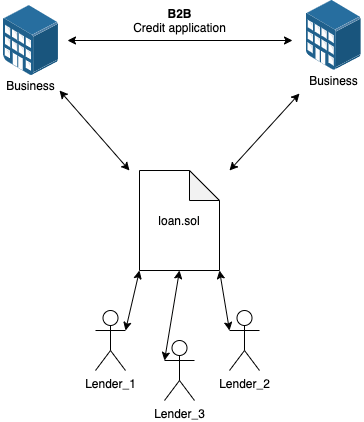 On the business side, businesses can register themselves as accepting this method of payment. This way the business is fully aware of the arrangement (the fact that their income from their client is via the unsecured loan DApp). These centralised “buy now, pay later” service like zip and/or afterpay are quite common these days. However, this Ethereum implementation would be decentralised whereby the decentralised lenders are earning the interest.

Thanks so much for your valuable input.