Simply increasing the limit will probably not help that much, since most funds get drained by a few people with outsized hashpower. I think the only solution is to shift some weight towards other methods… How about letting users solve additional captchas during mining, and use the number of solved captchas as some multiplicator of the hashrate?

Hmm, that would require constant monitoring of the page for captchas that ‘randomly’ pop up…
I think that’s too much for any user

And I actually don’t think it’s all mined by a few people with heavy machines.
There are thousands of sessions every day, most residential IP ranges (hosting & proxy IPs don’t get anything). I think it’s real demand as there are many people migrating their stuff from the deprecated testnets (rinkeby & ropsten).
There are also “Incentivized Testnets” of various projects that introduce additional load on goerli as they offer being included on a mainnet airdrop for testing their stuff…

It was decided a few days ago that there won’t be any technical change to fix the funding situation on goerli.
developers should head over to the sepolia testnet instead.

Especially because of that steady growing financial benefit for collecting goerli funds, the rewards of my faucet won’t be higher again anytime in future - it’ll rather be even lower.

There are currently ongoing efforts to launch a new ephemeral testnet for stakers to test validators without relying on goerli. Let’s see how this goes

Btw: faucetlink shows the alchemy faucet as not working, but it is working

It’s getting really difficult to acquire goerli eth these days… lowest hanging fruit would be to bring back some of the broken faucets. Hope they see this and find the time to repair 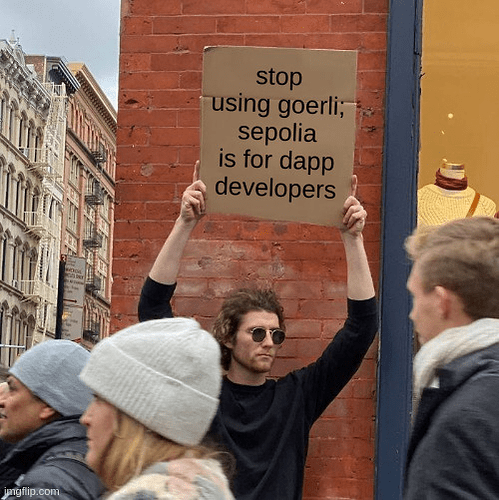 Stakers wanting to test their validator setups can use the EthStaker launchpad on Goerli
https://goerli.launchpad.ethstaker.cc/en/

yea, but supply isn’t the only issue. We still need solid faucet infrastructure for distribution, or we may run into bigger problems (e.g. spam attacks)