Hi, I would like to conduct a research to understand where will be the PoS validators (once moved from PoW to PoS) geographically in Ethereum network. It’s important to understand If there is a fair representation from different parts of the world (i.e.developing nations) . This research will enable us to understand landscape, challenges and barriers to have a true decentralisation from global geographical perspective.

Please feel free to post your thoughts and any material, personal i can reach out to make this research successful.

Thank you all in advance.

Why is this important? Validators have a job to do and they are paid to do it. Anyone from anywhere in the world can do this job and they will be paid the same regardless of their location, based only on their ability to complete the job successfully.

Keep in mind, censorship resistance is the goal, decentralization is the means to achieve this goal. Decentralization isn’t by itself a goal. Proof of Stake is designed so that it should work even if validators centralize (though centralization still does introduce some risks so we would prefer it doesn’t).

I feel in a light of ongoing regulatory crackdown the possibility of consensus-level attack from the state should be considered as a practical threat. For example, in a coordinated compliant softfork.

Thanks for your feedback. Idea of decentralisation is very personal in my opinion. as an ecosystem that is striving to achieve true decentralisation, it’s important to understand where the validators are based and what challenges current system is creating to other geographical regions to participate this economic game. In my opinion some of the regions I mentioned in the research scope are the areas that need the most decentralisation.

Correct, it’s important to know where the validators and keeping a live map enable to determine the jurisdictional risk. i.e. validators having to comply with SDN contract addresses etc.

I couldn’t agree more with your statement, it is crucially important to understand if there is a fair representation of validators and nodes from different parts of the world.

There are a number of dimensions to consider in maintaining a healthy level of decentralization, and I think the community is understanding this more over time. The canonical model for measuring decentralization is the nakamoto coefficient, of which the concentration of nodes by country is a key metric.

Right now we have: Countries - ethernodes.org - The Ethereum Network & Node Explorer - assuming that all EL clients will be paired with a CL client, this info could give you what you need?

For the beacon chain we have some excellent data from https://migalabs.es/ - perhaps their tools can be leveraged for plotting geographical dispersal of nodes?

Thank you so much @simbro . I will start with the sources you have shared and let you all know if i need further. Good to see there are others thinking in the same line of decentralisation. much appreciate it.

Right now we have: Countries - ethernodes.org - The Ethereum Network & Node Explorer - assuming that all EL clients will be paired with a CL client, this info could give you what you need?

For the beacon chain we have some excellent data from https://migalabs.es/ - perhaps their tools can be leveraged for plotting geographical dispersal of nodes?

There is an important distinction b/w consensus participants (PoS validators) vs. full nodes. Sounds like @pdsilva2000 is interested more in seeing how validators, and I would assume by extension economic stake, by geography? Not sure if fair to assume properties of the validator set (aka geo) mirror full nodes.

Correct, it’s important to know where the validators and keeping a live map enable to determine the jurisdictional risk. i.e. validators having to comply with SDN contract addresses etc.

Agree that assessing censorship resistance in the context of regulatory risk would be the key topical question here.

fair representation from different parts of the world

I think the harder thing is determining “fair.” Should it be proportional to address count (how would you determine this by geography?) or to economic value secured (again same question)? Or, more simply, should validator geo distribution be proportional to GDP or internet-enabled population count?

Keep us updated though @pdsilva2000! I’d be keen to see what results you come up with.

Thanks for your comments. from the regulatory risk perspective (i.e. if the validators have to comply with SDN list prior including transactions) , i think we need to determine where the full nodes are located as they are the only one can include transactions yea ? apologies for my ignorance in advance.

There is an important distinction b/w consensus participants (PoS validators) vs. full nodes

Yes absolutely, you’re right. I’m not sure though how you can unpick nodes vs. nodes that are also validators. Could node operators and solo stakers be convinced to self-report using the grafftti field?

Nodes can read the chain directly and send transactions to be included by validators, who are responsible for building and proposing blocks to be attested on by other validators.

Wait hasn’t this analysis already been done here? See: Eth2 Network Dashboard. Shows that ~34% of the ~4.3k validator nodes are located in the US 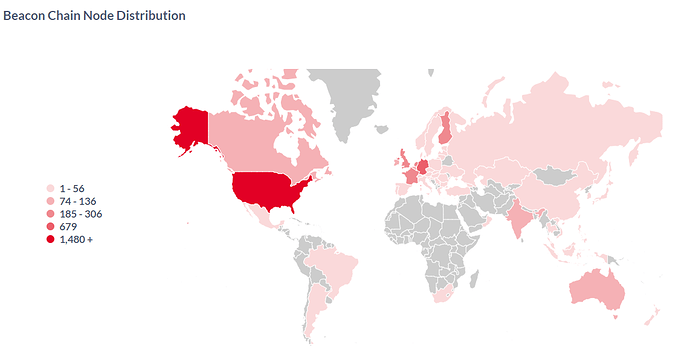 Yes indeed that’s the Miga labs dataset, but is this clients or actual validators?

I emailed them to check if it’s the entire validator node count (aka the physical machines / nodes) vs. a subset of the validator set.

I don’t understand the distinction between clients and nodes? I don’t think the geo dataset they have shows clients by type?

I don’t understand the distinction between clients and nodes?

I think in this context they are synonymous, but technically a “node” is an instance of a CL client and an EL client talking to each other over the engine API using a shared JWT secret.

Not all nodes are validators. A validator is a node (EL + CL client) AND a validator (signing key, withdrawal key, 32 ETH stake etc.). One example of a validator is:

…although most CL client have an in-built validator. The point is that not all nodes on the network run validators as well. For example, Alchemy, Infura, Moralis, Blockdaemon an all those providers will run a whole bunch of nodes (CL+EL clients) without actually have validators associated with them.

This is where the confusion lies in this case. It’s going to get even more confusing when we have DVT, but I suspect more decentralized at the same time.

Ah okay understood all that—just thought you were asking about client diversity / distribution of types of clients.

In that case, yes I think this is based on validator node count.

Did Miga Labs confirm that?

All good! No just my hunch for now…waiting for them to reply to my message. Or to hop into this thread

I just want to add something which I hope will be useful in increasing/improving the decentralization of authority/power post-PoW and post-Tornado Cash sanction.
Beside having a wider geographical dispersion of validators, I think 2 additional things can be very important to minimizing the influences of state power:

I am not in support of terrorism but I do feel sanctions at protocol level is a direct violation to the network. And I am worried allowing such sanction to be in place at protocol level will set precedence to a far more serious state control in the future.

I do not follow the blockchain development as closely as most does and thus I am not sure, but I believe if the above 2 elements are firmly in place, then Ethereum would be safe from state hijack even at protocol level. At best, state power will have to fork the chain to impose control but ultimately the majority will dictate which network (the one that is strictly controlled or the one that is free) will prevail.

Edit:
In addition, I learned some are worried that slashing the stakes of participants that support state sanctions will hurt the smaller guys that stake their ETH through larger centralized entities. For that, I believe if the slashing can be implemented at least 1 year after the Merge, whereby individual participants are notified to unstake their ETH from large centralized entities (such as Coinbase) post-Merge only to restake their ETH elsewhere that does not support sanctions, then implementing the slashing mechanism will help enforce the dignity of the network while still save the smaller guys from losing their share.