A pressing concern for rollups is user lockin. As gas price continue to rise. More and more people will hold funds which is not economical for them to withdraw to layer 1. As an example at the moment a transfer in rollup costs ~0.01 usd while a withdraw costs at least 0.40 USD. This means that if a user deposits 1 USD. Sends someone else 0.40 USD then both will effectively never be able to withdraw these funds unless the gas price goes down. They can transact internally.

This is really scary because users can get locked in to a certain rollup. It is unlikely that we will build the best version of rollup in the next six months. We will probably build multiple different versions that are good for different things. If users get locked in to the first few versions of layer 2 that we build it could be a problem for these users and the whole community.

Here we describe mass migrations where users can transfer from layer 2 to another layer 2 in a way that batches the token transfers + on chain gas costs. This post build upon Batch Deposits for [op/zk] rollup / mixers / MACI 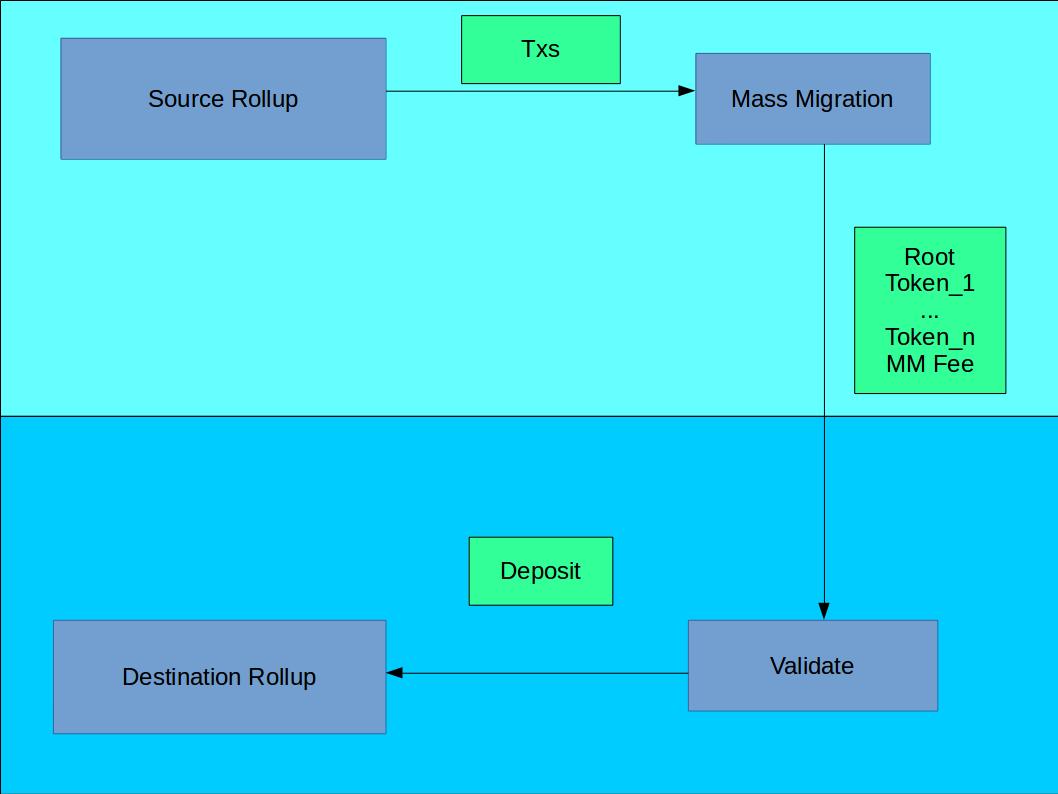 We have a source rollup and a destination rollup. We want users to withdraw from one to the other. So the source coordinator use mass migrations to combine many transfers together so that the total amount can be sent in one transaction.

After these checks the mass migration can be merged into the destination state tree.

If both rollup follow the same standards they can mass migrate as above.
If they do not we will need to add an extra step of translate between mass migration and validate. In this step a coordinator converts from one format to another.

Things that should be the same

For example migrating from zk to optimistic rollup may require this translation.

When users mass migrate they need to pay fees on the source and the destination. On the source they pay a fee directly to the source coordinator as they do in other transactions.

There is risk here that the gas price will fluctuate and the mass migration fee defined in the source rollup will not be enough to cover the cost of validating. NOTE: Think about this more

If a rollup wants to

They can choose the “orbit” the source rollup. Orbit means that you

The orbit pattern means you can continue optimistically on the destination side before a mass migration has been finalized on the source side ie the tokens have been transferred. It is also a good upgrade pattern where you can allow users to migrated from the old rollup chain to a new one at the cost of about a single transfer.

At the moment rollups are naturally monopoly forming. Its important that we build rollups in a way that users can exit without the prohibitive cost that current solutions provide. Its too early to build the perfect solution. We should instead try and build in a way that allows users to upgrade and change as the tech evolves.

User lockin in a big problem that we need to be careful about.

I like your thoughts about the migration scheme and willing to standardize the rollup scheme. That could help a lot In the future.

Speaking of lockin:
So it doesn’t look like the problem: Cost of withdrawal is a constant value (in terms of gas). If the gas price goes up: the tx cost in the main et will rise proportionally. Same as with any tokens: you are risking to locking your tokens if users don’t have enough gas to transfer them.
And it’s the same as with any L2 party services: you have to know that nothing is for free and remember the cost of exit and need to keep in mind that you have to pay for an exit this fixed amount of gas for this.

As an alternative and easier (UX) solution:
L2 solution could simply warn users if, after deposit/transfer money, they can’t withdraw the rest amount.

f the gas price goes up: the tx cost in the main et will rise proportionally. Same as with any tokens: you are risking to locking your tokens if users don’t have enough gas to transfer them.

This is not the case for a stable coin for example.

L2 solution could simply warn users if, after deposit/transfer money, they can’t withdraw the rest amount.

I think we should do both.