Traditional zk-rollup migrates the computation from on-chain to off-chain, and requires a solidity contract on the chain (ethereum) to verify that the rollup data is valid. However, this architecture causes some problems:

Opside proposes a 3-layer scaling architecture, where layer 2 is an EVM-compatible and Rollup-friendly chain, and layer 3 is composed of different zk-rollups. The Opside chain makes many system-level optimizations for zk-rollup, and introduces the concept of native rollup.

Native rollup is somewhat similar to the architectures of Polkadot and Starknet. Once a rollup registers a slot, the rollup becomes a native rollup. In contrast, the Polkadot architecture has the disadvantage that the consensus of the parachain depends on the assigned set of validators. There is a correlation between security and the number of validators. If a few validators went offline, the parachains whose validator groups are too small to validate a block will skip those blocks, or even stop until the situation is resolved. Opside does not have this problem because layer 2 collects data from all native rollups in layer 3 and verifies all zk proofs. Opside chain is more secure and decentralized with all rollups on it as a tighter whole, sharing the same consensus layer. 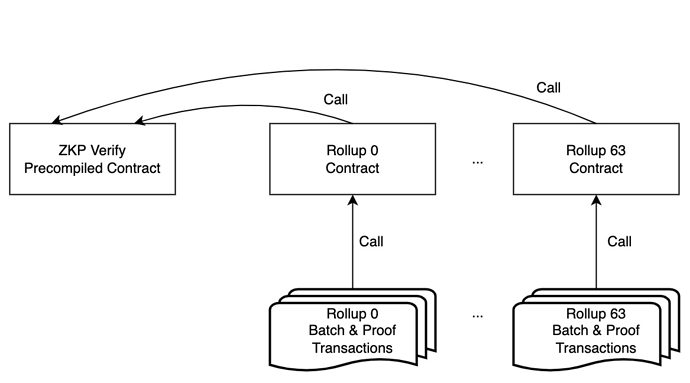 Compared with the 3-layer architecture of Starknet, Opside’s 3-layer architecture also has obvious advantages. First of all, Starknet’s 3-layer architecture, does not address the issue of data availability. Because all L2 and L3 data still have to be uploaded to ethereum eventually, even with some compression, the data volume is still large and the cost is still high. One solution is to use validium as DA layer, which can greatly reduce the cost of data storage, but it will cause the loss of security. Opside’s layer 2 is both an execution layer and DA layer, which can provide cheaper data storage than ethereum. Secondly, Starknet’s layer 3 network consists of individual independent rollups. The operators (sequencer and prover) between these rollups are independent, and there is no mechanism for cross-rollup communication in the architecture. Opside’s architecture solves these problems.

In short, Opside will provide a normalized interface at the system level, which brings many benefits:

Layer 2 and layer 3 of the Opside architecture share a consensus mechanism with a hybrid of PoS and PoW. 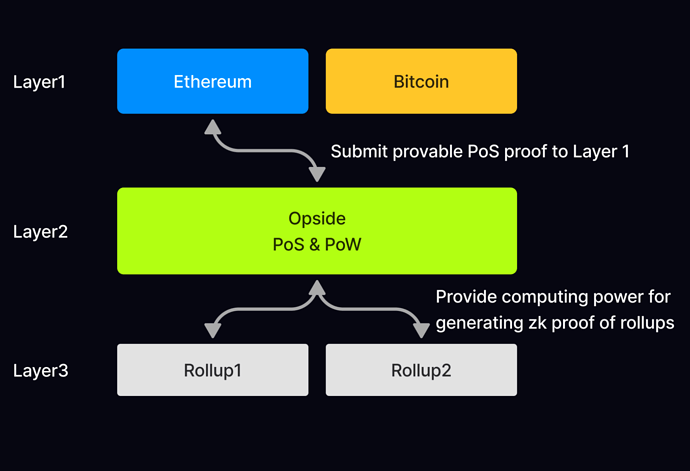 With the hybrid of PoS + PoW consensus mechanism, Opside unifies validator set of layer 2 and layer 3 to ensure the security, decentralization and permissonlessness of the whole system. More importantly, Opside provides a reliable decentralized solution for each Native Rollup in layer 3 at the system level. Opside defines a unified system contract, and rollup developers only need to implement these standardized interfaces and register rollup slots as native rollups, so that they can focus more on the implementation of business logic and do not need to care about how layer 2 and layer 3 interact at the underlying architecture level.

In traditional rollups, each rollup deploys a solidity contract on Ethereum, and the state tree of each rollup is maintained by its own solidity contract. Therefore, the state trees of each rollup are independent from each other, which causes fragmentation of users’ assets. In addition, each rollup has its own cross-chain bridge, which is also very complex, slow and expensive to use. These bridges between rollups and Ethereum also rely on smart contracts to complete. In fact, most users now choose to use a third-party liquidity bridge to complete asset transfers between rollups, which can pose a great safety risk.

In Opside, after completing the registration of slots, native rollups share a world state tree with each other and the same global message queue. Therefore, native cross-rollup interoperability is possible in Opside. Imagine you want to lend USDC to a loan contract in Rollup A and then go to DEX in Rollup B to trade to buy BTC. In Opside you no longer need to withdraw assets from Rollup A to L1 and then recharge them from L1 to Rollup B. Instead, you can call the contract method of Rollup B directly in Rollup A. This will make the whole process much faster, cheaper and safer.

Another benefit that can be gained by registering a rollup slot is the ability to use precompiled contracts to speed up the verification of zk proof.

Specifically, the proof verification of a traditional zk-rollup is also a normal contract call transaction that relies on the solidity language to complete. In Opside, the proof verification of a native rollup is handed over to Opside’s optimized precompiled contracts to perform. These precompiled contracts are implemented in the rust language and are deeply optimized for cryptography based on Opside’s extensive experience in the zk domain.

Opside is a 3-layer scaling solution, with layer 2 being an EVM-compatible and rollup-friendly blockchain. In Opside’s architecture, layer 2 and layer 3 are a more tightly integrated whole. The core concept of Opside is Native rollup.

In contrast, the Polkadot architecture has the disadvantage that the consensus of the parachain depends on the assigned set of validators.

This is false. Backing groups only impact liveness, not safety or soundness.

There is a correlation between security and the number of validators.

Also not true, its liveness that’d suffer then, not safety or soundness. If too many validators go offline then polkadot slows down, but security does not suffer. Appears the linked wiki makes some incorrect statements btw.

If a few validators went offline, the parachains whose validator groups are too small to validate a block will skip those blocks, or even stop until the situation is resolved.

This is true, but backing groups rotate fairly quickly, so individual parachains stall for a minute or two per offline backing group, even if the backing group stays offline indefinitely.

Polkadot runs an interactive proof under a byzantine threat model. It’s a “cut n choose roll up” in a similar mildly flawed sense to a SNARK roll up being called a “zkSNARK roll up” or just “zk roll up”. Polkadot is however a proof just like a zk roll up is. Polkadot needs byzantine assumptions for soundness though, while a zk roll up needs only cryptographic assumptions for soundness.

An important advantage of zk roll ups is that they can be freely nested, which comes from their extremely expensive overkill of depending upon only cryptographic assumptions. If you obtain soundness from byzantine assumptions, like polkadot or Bryan Ford’s omniledger, then nesting always requires larger composed assumptions.

If your underlying L1 does not afford its byzantine assumptions in an optimized way, like polakdot or omniledger do, aka true sharding, then off chain computations cannot have soundness under exactly the L1 assumptions. In other words, all optimistic roll ups or similar wind up being fancy bridges under the hood, in that they must add more assumptions than their underlying L1.

Layer 4 will be even better. But long term Layer 5 will be winning, until Layer 6 beats them all.

This post was flagged by the community and is temporarily hidden.

Amazing post learned a lot! was curious more about cross rollups communication and contract calls, could you share some resources ?

Thanks for your reply. Of course, Polkadot has done some amazing work. Here I just borrowed some official Polkadot wiki to argue that the “base layer ← zkRollup” architecture, compared to the “relayer chain ← parachain” architecture, is a tighter whole, sharing the same level of security and decentralization.

In fact, layer3 is the big trend. Not only the article mentioned starknet in the design of 3-layer architecture, polygon and zksync, etc. layer2 solutions, are in preparation for layer3, too.