Ethereum’s current approach to proof of stake works by picking a single validator using a publicly computable random function to be the proposer for each slot. This is in contrast to PoW, where instead every validator has an independent random chance of being a valid proposer at any given time.

This post explores an alternative based on protocol engineering rather than cryptography: what if we remove the requirement to have a single chosen leader? What if we go back to giving each validator an independent random chance of being a valid proposer, but actually try to handle conflicts fairly?

Suppose that there are N active validators. Each validator has a \frac{5}{N} chance of being a valid proposer at any given slot. One simple way of implementing this is to require that the hash of the randao reveal of the block must be less than \frac{2^{256} * 5}{N}. The randao reveal has the property that there is only one possible valid value that any validator can generate in any slot, but this value can only be calculated ahead of time by the validator themselves. This is ideal: it means that only the validator themselves can know ahead of time whether or not they are a valid proposer at a given slot.

The above parameters create a Poisson distribution with \lambda=5. During each slot, there is a 1 - e^{-5} \approx 99.3\% chance of having at least one proposer. However, there is also a \approx 96\% chance that there will be more than one proposer. How could we fairly, and safely, deal with this situation?

Fairness alone is easy to solve: if there are multiple proposers, they all propose, and the one with the lowest randao reveal hash wins. But is this safe? 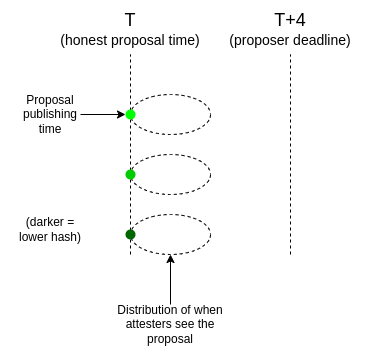 All proposers propose at time T, and all proposals reach all attesters before T + 4. Attesters all vote for the proposer with the lowest randao reveal, and so there is one leading proposer with a large fork choice advantage over the others.

Medium case: the lowest-hash proposer is honest, some other proposers are dishonest 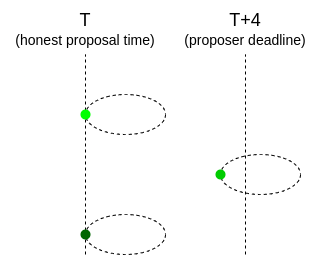 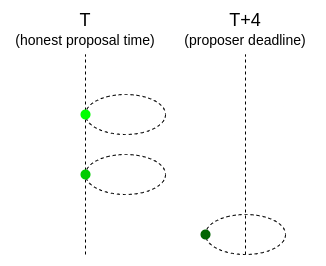 Recovery in the status quo happens through proposer boosting. We assume that the chain continues to be potentially chaotic for one or more slots until there is a slot with an honest proposer. At that point, the honest proposer produces a block, and we give that block an extra bonus to their fork choice score, enough to override a large portion of the attesters. The attesters for that next slot, when computing the fork choice, only take into account attestations that they received before the start of that slot, plus the proposer boost, and so there is one single actor that “pushes” the fork choice split to one side or the other.

The main difference is that if the lowest-hash proposer is malicious, then attesters may have a 2x larger disagreement in their fork choice views: instead of some attesters seeing the boost and others seeing no boost, some see a boost in one direction and others see a boost in the other direction. This may reduce the maximum safe size of a boost by up to 2x and should be studied more, but is not a fatal flaw.

One small change to the current PBS proposal seems to be required. In the current proposal, the proposer boost of a builder is larger than the entire attestation committee. This would be risky in a multiple-proposer-per-slot world for a similar reason to what is identified above: if a builder builds on a block B_1, but there is a proposer with a lower-hash randao that has not yet published, then they could release B_2 and steal the MEV from B_1. The fix is to make the builder’s proposer boost smaller, so that the builder B_1 would only publish after attestations on top of B_1 have been made and those attestations would ensure that it beats B_2 in the fork choice and B_2's proposer boost would not overrule them.

Secret elections with multiple proposers per slot allow for “time buying” MEV attacks. An attacker (e.g. a pool) which controls two proposers in the same slot can publish two proposals:

The risky proposal is at a greater risk of not reaching most attesters in time (and therefore not make it on-chain) but has more MEV than the safe proposal (from the extra time “bought”).

Notice that the attacker benefits from the possibility of extracting more MEV via the risky proposal in addition to the fallback provided by the safe proposal.

Maybe minor diff is here you do not know ahead of time if you are going to win, only after you commit and then see the public rand, may be an advantage for MEV?

Apologies if the questions are naive, I may not have all the background.