TL;DR: We describe a generic attack on PoS GHOST variants. This points to conceptual issues with the combination of PoS and GHOST. PoS Ethereum as-is is not susceptible to this attack (due to LMD, which comes with its own problems, see here). Still, we think this attack can inform the fork choice design and help projects that (consider to) use similar consensus protocols.

We assume basic familiarity with GHOST (see Gasper and the GHOST paper). Knowledge of the beacon chain fork choice specification and earlier attacks won’t hurt, either.

The Avalanche Attack on PoS (Proof-of-Stake) GHOST (Greedy Heaviest Observed Sub-Tree) combines selfish mining with equivocations. The adversary uses withheld blocks to displace an honest chain once it catches up in sub-tree weight with the number of withheld adversarial blocks. The withheld blocks are released in a flat but wide sub-tree, exploiting the fact that under the GHOST rule such a sub-tree can displace a long chain. Only two withheld blocks enter the canonical chain permanently, while the other withheld blocks can subsequently be reused (through equivocations) to build further sub-trees to displace even more honest blocks. The attack exploits a specific weakness of the GHOST rule in combination with equivocations from PoS, namely that an adversary can reuse ‘uncle blocks’ in GHOST, and thus such equivocations contribute to the weight of multiple ancestors. Formal security proof of PoS GHOST seems doomed.

A proof-of-concept implementation for vanilla PoS GHOST and Committee-GHOST is provided here. By “vanilla PoS GHOST” we mean a one-to-one translation of GHOST from proof-of-work lotteries to proof-of-stake lotteries. In that case, every block comes with unit weight. By “Committee-GHOST” we mean a vote-based variant of GHOST as used in PoS Ethereum, where block weight is determined by blocks (and potentially a proposal boost). Subsequently, we first illustrate the attack with an example, then provide a more detailed description, and finally show plots produced by the proof-of-concept implementation.

We illustrate the attack using a slightly simplified example where the adversary starts with k=6 withheld blocks and does not gain any new blocks during the attack. In this case, the attack eventually runs out of steam and stops. (In reality, the larger the number of withheld blocks, the more likely the attack continues practically forever, and even for low k that probability is not negligible.) Still, the example illustrates that k=6 blocks are enough for the adversary to displace 12 honest blocks—not a good sign.

First, the adversary withholds its flat-but-wide sub-tree of k=6 withheld blocks, while honest nodes produce a chain. (Green/red indicate honest/adversarial blocks, and the numbers on blocks indicate which block production opportunity of honest/adversary they correspond to.) 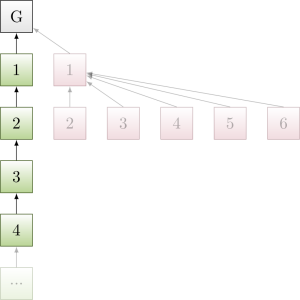 Once honest nodes reach a chain of length k=6, the adversary releases the withheld blocks, and displaces the honest chain. 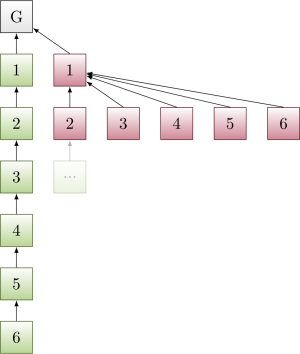 Note that the adversary can reuse blocks 3, 4, 5, 6. Honest nodes build a new chain on top of 2 → 1 → Genesis. Once that new chain reaches length 4, the adversary releases another displacing sub-tree. 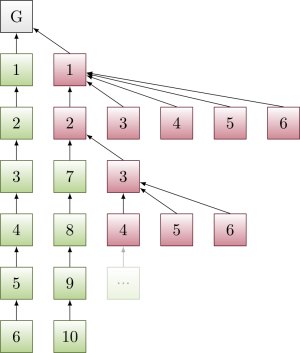 Finally, note the adversary can reuse blocks 5, 6. Honest nodes build a new chain on top of 4 → 3 → 2 → 1 → Genesis. Once the new chain reaches length 2, the adversary releases the last displacing sub-tree. 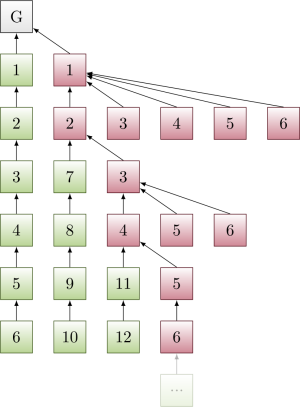 Honest nodes now build on 6 → 5 → 4 → 3 → 2 → 1 → Genesis. All honest nodes so far have been displaced. Overall, the adversary gets to displace O(k^2) honest blocks with k withheld adversarial blocks.

Selfish mining and equivocations can be used to attack PoS GHOST (using an ‘avalanche of equivocating sub-trees rolling over honest chains’—hence the name of the attack). The following description is for vanilla PoS GHOST, but can be straightforwardly translated for Committee-GHOST. Variants of this attack work for Committee-GHOST with Proposal Weights as well.

Suppose an adversary gets k block production opportunities in a row, for modest k. The adversary withholds these k blocks, as in selfish mining (cf Figure 1 above). On average, more honest blocks are produced than adversary blocks, so the developing honest chain eventually ‘catches up’ with the k withheld adversarial blocks.

At the same time, ties are broken such that honest nodes from now on build on what was the second withheld block. This is crucial, as it allows the adversary to reuse in the form of equivocations the withheld blocks 3, 4, …, k on top of the chain Genesis → 1 → 2 formed by the first two withheld adversarial blocks, which is now the chain adopted by honest nodes.

For illustration purposes, we plot a snapshot of the block tree (adversarial blocks: red, honest blocks: green) resulting after 100 time slots in our proof-of-concept implementation. The attack is still ongoing thereafter, and as long as the attack is sustained, no honest blocks remain in the canonical chain permanently. 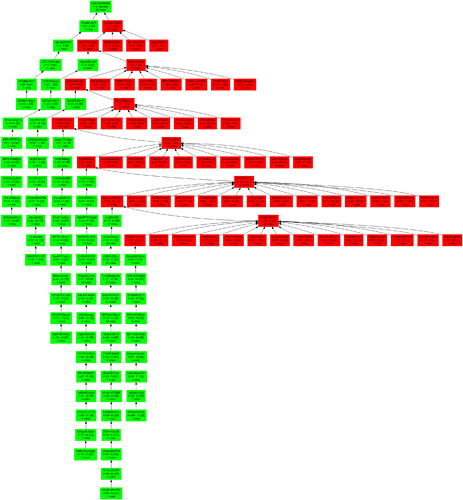 PoS Ethereum’s LMD (Latest Message Driven) aspect interferes with this attack, but comes with its own problems, see here.

Some time ago, when ETH foundation requested security vulnerability comments to ETH2 specification, I submitted several security bugs, all of them were successfully ignored.

One of them was about block proposer submitting potentially unlimited number of fake proposals.

A proposer can be slashed for proposing and signing more than one block proposal, but slashing is limited to the security deposit of the proposer (32ETH), which is non-essential for the attacker.

So a single proposer can propose zillions of fake block proposals in a single block, which could make any attack even more dangerous, including the one described above.

I think it would be logical for the ETH foundation to announce an adversarial competition to let people break the network by controlling a small number of validators. I personally would be happy to participate. I feel there are a number of security vulnerabilities that one could try exploiting.

The fact that ETH2 has not been attacked so far is partially because there is little real money in play. This will change dramatically once the merge happens.

It seems logical that before ETH2 merge happens such a competition takes place.

which could make any attack even more dangerous, including the one described above.

It’s important to note that the theoretical attack in this post hinges upon counting equivocations which the beacon chain spec does not do. So “creating zillions” of fake block proposals is not made worse by the above.

[Apologies for hijacking the thread. Such an attack if double counting equivocations in LMD GHOST is a very valid and viable threat]

all of them were successfully ignored.

All of these reported issues were responded to. The particular issue you noted here was with respect to DoS attacks to which the DoS protection measures found in the p2p spec were referenced. The approximate number of DoS blocks you could get onto the network is approximately a function of the count of honest nodes on the network (assuming you can deliver a unique block to each honest node before it has seen another block forwarded from another honest node), so “a zillion” is not the bound on the DoS attack.

Additionally, testnets or private networks are a good place to attempt attacks before submission to the bug bounty program.

I am a bit confused about the description about this attack.